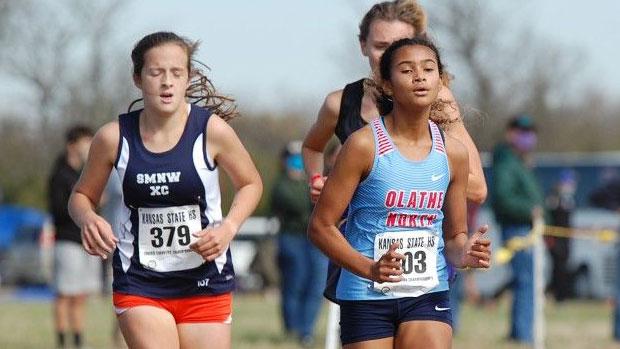 In my preseason look at Kansas track and field, we made some educated guesses on the best teams by classification which - admittedly - I was not too confident about since we really had not seen two classes of athletes (freshmen and sophomores) due to the COVID-19 pandemic.

At the midway point of this season, I thought I'd compare what we guessed could happen and how MileSplit actually ranks Kansas teams based on the first five weeks of the 2021 season.

Comments: Yep, Manhattan's boys are as good as advertised with No. 1 rankings by seniors Charles Jones (high jump and long jump) and Darius O'Connell (shot put), and top three rankings by Julian Avila Vargas (800), Jason Moran (javelin), Jaden Magana (discus) and two-time Gatorade Runner of the Year Daniel Harkin (1600 and 3200). Blue Valley's Ben McAlister is No. 1 in the discus and No. 2 in the shot put, while pole vaulters Dylan Arnold and Jason Berg sit at No. 2 and 3.

Comments: Mill Valley has the top two pole vaulters in class 5A in Garrett Beashore and Kyle Mayfield (both have cleared 13-6 this season), and the No. 1 javelin thrower (Jakob Casper, 169-0). Shawnee Heights sophomore Jeremiah Smith is a bright new star on the state's track scene; he currently has the division's top marks in the 100 and 110 hurdles, and is No. 3 in the 200.

Mill Valley's girls could be in a tussle with St. Thomas Aquinas for the 5A state crown. Mill Valley has one of the state's best hurdlers in Quincy Hubert (No. 1 in the 300 hurdles and No. 2 in the 100 hurdles), and the No. 1 javelin thrower (Lily Fleetwood). St. Thomas Aquinas has the No. 1 ranked long jumper (Grace Allen) and high jumper (Paris Bond), but surprisingly shows no distance points right now. Mill Valley has a pair of state title contenders in the distances in Molly Ricker and Katie Schwartzkopf. Leavenworth's girls are just now beginning to compete in the short sprints, so that squad may still rise to contender status.

Comments: Very strange how the top five teams are the same in the boys and girls divisions. Andale is a powerhouse in class 4A, combining exceptional field events with enough on the track to make it a clear favorite to sweep the state titles. Andale's boys have No. 1 rankings in the long jump (Nathan Seck) and pole vault (Ty McPhail), including a projected 1-2-4 finish in the pole vault - the same event that lifted the team to a state title a year ago. Paola's Bo Robison is No. 1 in the javelin and could also get top three finishes from Cadin Rhamy and Jake Karr in the discus. Chanute sprinter Rawley Chard is No. 1 in the 400, and top four in the 100 and 200.

Andale senior Katelyn Fairchild is No. 1 in the javelin and shot put, and No. 2 in the discus, an event in which her sister McKenzie Fairchild is No. 1. McKenzie is also No. 2 in the javelin and No. 3 in the shot. Teammate Annabeth Baalmann is No. 1 in the pole vault. Eudora will try to keep pace with strength on the track; the squad is top two in each of the relays, and could score as much as 30 points in the distance events with Sydney Owens, Phoebe Fletcher and Mackenzie Mayer.

Comments: Southeast of Saline is still a clear favorite in the boys division, but watch out for Girard. That squad rises to a strong runner-up status with distance ace Cormick Logue (No. 1 in the 3200) and sprinters Aiden Damman (No. 2 in the 200) and Gavin Dubrava (No. 2 in the 400). Southeast of Saline projects for 45 points in the distance events with Dominic Jackson, Dylan Sprecker and Luke Gleason, but Logue - the class 3A state cross country champion - could put a further dent in that total and help his team make the title chase more interesting. Southeast of Saline's Chase Poague is No. 1 in the 110 hurdles and 300 hurdles, and all three of the squad's relays are ranked in the top 2.

Expect a tight race in class 3A girls between Smoky Valley, Marysville and Eureka. Smoky Valley gets the mid-season nod keyed by Belle Peters, who is No. 1 in the pole vault and 200, and No. 2 in the long jump and 100 hurdles. Gracie Lambert is currently No. 1 in the 800. Marysville's Eva Peschel is No. 1 in the long jump (No. 4 in the triple jump) while the squad will likely also pick up big points in the relays and sprints, headed by Bella Lott and Brynn O'neil. Eureka's strength is in the sprints and relays, though high jumper Brooklyn Ptacek currently sits at No. 2.

Comments: It seems as though boys and girls team races will be tight. Trego Community's boys have the division's best distance runner (Wyndom Giefer, No. 1 in the 1600 and 3200), and strong sprints and relays led by Trevyne Brown and James Kriegh. Kansas City Christian is also strong in the sprints, relays and distances, and Coulton Chan is No. 2 in both hurdle events. Wichita County's Sheldon Whalen is No. 1 in both hurdle events, and Sterling's Tyus Wilson is No. 1 in the high jump (where he is also No. 3 in the United States) and long jump.

The girls division features mega-stars from each of the contending teams. Bluestem's Torrance Lovesee is No. 1 in the triple jump and discus; No. 2 in the long jump; and No. 5 in the shot put. Stanton County's Chesney Peterson just may be the state's best distance runner regardless of classification, and is No. 1 ranked in the 800, 1600 and 3200. Bennington's Jasey Downing and Trista Watson are No. 2 and No. 4 ranked, respectively, in both the 100 and 200, and key top 4 ranked relays.

Comments: Madison could get four individual state titles with No. 1 ranked Bryson Turner (long jump and 100) and Casey Helm (discus and shot put). Turner is also No. 2 in the 200. Hanover's Emmitt Jueneman is No. 1 in the triple jump and No. 2 in the high jump, while Colin Jueneman is No. 3 in the long jump.