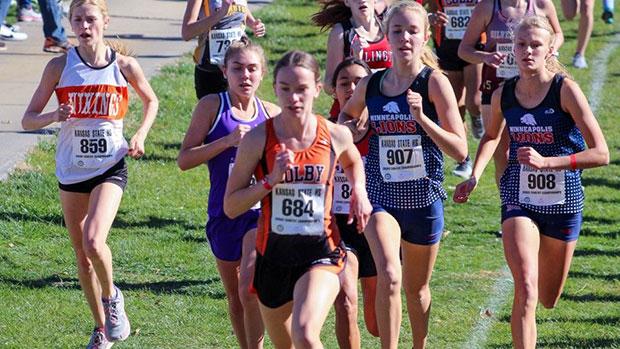 Coaches, by and large, are a superstitious lot.

So, it's doubtful that Wade Casselman is losing any sleep over the preseason class 3A cross country state rankings.

By the Kansas MileSplit database, the Southeast of Saline girls come in at No. 2 in class 3A entering the 2021 season. Scott Community holds down the top spot, a solid 16 points ahead of the defending state champs.

The Southeast of Saline boys - gulp! - don't even crack the podium at state, despite dominating the field at last year's state meet and having won 2 of the last 3 boys team titles. The squad also has, perhaps, the division's top runner in senior Dylan Sprecker, who bounced back from injury during last year's cross country season to win three state titles on the track last spring.

The Trojans did lose two solid seniors from last year's championship team, but it's a bit hard to believe that they've fallen to fourth in the division.

Casselman - the long-time coach of the Southeast of Saline program - probably likes the fact that the numbers aren't pointing squarely at his team starting the 2021 season. It's a lot more comfortable being the chaser rather than being the hunted; plus, when you're on top to start, there's only one direction you can move.

The girls' squad is led by senior Jentrie Alderson, the 2019 state cross country champ who battled illness in 2020 and settled for seventh at state. Back to her normal self by spring, she then crushed the field to win state titles in the 1600 and 3200 on the track.

Southeast of Saline's girls return their top 6 runners from the team that overwhelmed the rest of the 3A girls field at state last year. After Alderson, the rest of the returners include seniors Joni Schroeder and Mallorie Pearson; junior Ashley Prochazka (who finished third in the 3200 on the track in May) and sophomores Sadie Franklin and Brookelyn Adams.

Scott Community was 16 points behind Southeast of Saline for the state title a year ago. That squad appears to be the top threat for the team championship again this year with 6 of 7 runners returning, including Brinlie Stevens, a sophomore who was 24th at state last year; and Emma Wheeler, also a sophomore who clocked 20:21 as a freshman.

The top end of class 3A girls seems to fall off drastically from there. Cimarron, Norton Community, Trinity Academy and Southwestern Heights will fight for a podium spot - though it's likely to be third place at best.

So long as she's healthy, Alderson enters the new season as the state title favorite, but she'll get a fight from Columbus standout Montana Ohmart (third in cross country and the 1600 last year); Minneapolis stars Alayna Cossaart and Maddy Krueger (career bests of 19:37 and 20:09); Colby's Kathie Chavez and Seanna Metcalf (19:39 and 20:06) and Southwestern Heights' Ozia Trujillo (19:52).

Scott Community's boys get the early nod as the state title favorite in class 3A, returning 6 of 7 runners from the team that finished third at state in 2020. Their sole loss was top finisher Roberto Apodaca (11th at state) but this seems to be a team that will run in a very tight pack.

Senior Jaxon Kough, 24th at state a year ago, is the squad's top returner.

Trinity Academy - which didn't even qualify a team to state a year ago but has a pair of potential stars in sophomore Samuel Ferguson and junior Ian Carroll - could rise to the podium this season, and Smoky Valley - last year's runner-up - returns much of its squad for another run at the state title.

Southeast of Saline projects to place behind those squads because the back end of its team is unknown at this time. The smart money says Casselman's Crew fills in that gap quite well; with Sprecker a reliable front-runner, Southeast of Saline is likely to be the team most others are aiming for.

Junior Damion Jackson - 14th at the state meet last year - is a budding star that gives Southeast of Saline another reliable front-runner.

After Sprecker, the list of top individuals includes Council Grove's Lakoddah Downes, who burst on the state scene last year with a second place finish at the state cross country meet, and medal-winning efforts in the 1600 and 3200 on the track. Downs is a gritty runner who is dangerous in a homestretch kick.

CJ Meyer of Wichita Collegiate clocked 15:45.7 last year and enters with the best career mark of any class 3A boys runner. Gavin Dubrava of Girard, Daegan VanPelt and Braxton Sizemore of Holcomb and Cameron TenEyck of Silver Lake are capable of winning a state title, as well.