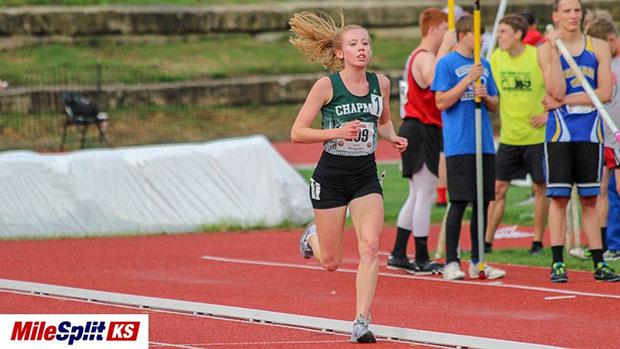 Chapman's Taylor Briggs is seeking to close out a perfect 10-0 high school career record in state championship races when she runs the class 4A 1600 and 3200 meter runs on Friday.

We're doing our annual previews of the Kansas State Track and Field Championships differently this year. Instead of one story for each classification, we will publish one story previewing each day of competition. Today, we will take a look at the class 3A/4A championships, which take place Friday.

Let's not get too far ahead of ourselves.

It's probably true that Chapman's Taylor Briggs will cap an undefeated senior season and a perfect, four-year state record when she runs the 1600 and 3200 meter runs at the class 4A state championships this Friday.

Briggs is nearly a minute better than anyone else in the 3200 meter field, and in the past month, nobody in class 4A has run within 10 seconds of her season-best 5:01.07 in the 1600. She's the four-time class 4A state champion in cross country, winning by nearly two minutes last fall.

Her record in Kansas high school races is 70-8, or a winning percentage of .897. She's never lost to a Kansas competitor in class 4A. If she completes the sweep of the 1600 and 3200 this Friday, she will conclude her high school career at 10-0 in state meet competition - only the second Kansas distance/middle distance runner ever to go undefeated in state meet competition (Shawnee Heights' Trisa Nickoley was the first).

But, forget all that. Take a moment to appreciate Briggs' unique talent. During Friday's meet, pause and simply take in the grace and power and beauty that she runs with. We're seeing one of the most successful high school distance runners in our state's history. Enjoy the moment.

There is a lot of star power in the class 3A/4A meets this year, but none of that translates into close team races. Andale is likely to sweep the boys and girls 4A chases by double digit points, both following a familiar script of establishing a huge lead in the field events and daring the field to try and catch them with points on the track.

The class 3A team races are equally one-sided. Southeast of Saline's boys and Smoky Valley's girls probably will double the point totals of their nearest challengers.

There are the intangibles, of course, and this year those will be influenced by how well athletes handle the one-day state meet schedule. Sprinters will be running a lot of preliminary and final heats in a short timeframe - possibly as much as five races in less than three hours for those who have qualified in the 100, 200 and the shorter hurdling events.

Distance runners have less time between races than they would normally get at the state meet, but it's still a bit more than they typically get during regular season meets. Yet, running distance races in the daylight hours - normally, they run at night - creates its own challenges with hydration and the cycle of warm-up/cool-down/rest. Those who have qualified in the 800, 1600 and 3200 will run those events inside a seven-hour timeframe; that's something they've not had to do at the state meet in the past.

Those in the field events...well, maybe it's a bit more business, as usual. They're used to juggling multiple events happening at nearly the same time. In fact, some may actually get more rest time between field events than they would normally get at a regular season meet.

Andale entered the 2021 season as a double-digit favorite for the class 4A team title, and that seems to still be the case, based on regional results. Andale has the No. 1 ranked competitors in class 4A in five events, including the pole vault (Ty McPhail), long jump (Nathan Seck), shot put (Jackson Kraus) and discus and javelin (Riley Marx). They could sweep the top three spots in the shot put and pole vault.

Louisburg and Buhler could be dominant on the track. Louisburg's Tom Koontz is No. 1 in the 110 and 300 hurdles, and distance runner Tanner Lindahl had the top class 4A time in the 3200 in last week's regionals. Still, Andale will likely have a huge lead coming out of the field events and they're going to be hard to catch. Pick: Andale

Paola picked a bad time to have a great team. In class 4A, they have to go up against the juggernaut that is the Andale girls track and field team, which features several nationally-ranked throwers and pole vaulters.

Katelyn Fairchild is No. 2 in the United States in the javelin (175-4) and No. 1 in Kansas in class 4A in the shot put and discus. She teams with sister McKenzie Fairchild and senior Samantha Marx for what could be 1-2-3 finishes at state. Those three, alone, could team for more than 70 points.

Andale also has three of the top four ranked pole vaulters in class 4A (Annabeth Baalmann, Claire Rowland and Mary Meyer), and the top-ranked 4 X 100 and 4 X 400 meter relays.

Paola is dominant among the rest of the field, and could score state points in a dozen events. Chapman, Independence and Eudora have a good shot at the final podium spot. Pick: Andale

Maybe the only drama in this division is whether or not Southeast of Saline will double up the point total of the runner-up team. Southeast of Saline has the division's No. 1 ranked athletes in the 800 and 1600 (Dylan Sprecker), 110 and 300 hurdles (Chase Poague) and the 4 X 400 and 4 X 800 relays. Its distance squad - including Dominic Jackson and Luke Gleason - forecasts to score nearly 60 points.

Girard continues to be a surprise as a solid runner-up. Aiden Damman (400) and Cormick Logue (3200) are ranked No. 1 in their respective events. Scott Community, Perry LeCompton and Holcomb will likely fight it out for the third spot on the podium. Pick: Southeast of Saline

Eureka leads up the rest of the field, led by class 3A's top-ranked 300 meter hurdler, Ashley Singhateh (who's also No. 2 in the 100 hurdles, and is probably Peters' biggest threat for the 100 meter title). As many as a half dozen teams could emerge to fight it out for third place. Pick: Smoky Valley

They are key to Buhler's chances for a team title, but that aside, they should light up the track in the longer sprint. Caution: if you think you're seeing double, you're not...

Fairchild has thrown 173-6 and 175-4 the past two weekends, well beyond the current all-class state record of 168-8 set by Olathe North's Dana Baker in 2018 - a record we once thought would stand for a very long time, right?

Fairchild, ranked No. 2 in the United States currently, could well take down that record on Friday. She's also the pre-meet favorite to win the shot put (10 a.m.) and discus (12 noon).

Logue dominated class 3A cross country last fall, repeating as state champion by a convincing 18-second margin. Sprecker was fourth in that race, but he had just come back from a foot injury. They will first match up in the 3200 (11:30 a.m.), where Logue has a better season PR (9:19.37), but it's the 1600 where the winner could also grab the class 3A state record.

Peters will be challenged by the compressed state meet schedule that will have her running prelims in the three track events late in the morning, followed by finals in the 100 and 100 hurdles in early afternoon - five races in under three hours. Fortunately, the pole vault is scheduled prior to any of her running events; she'll likely have one gold medal around her neck by the time she straps on the running spikes.

Also, Riley County's Burton is No. 1 in the discus among all Kansas divisions, and No. 25 in the United States. She threw a career-best 155-1 to win last week's regional. Burton is also the pre-meet favorite to win the shot put, with a season-best of 42-8.75.