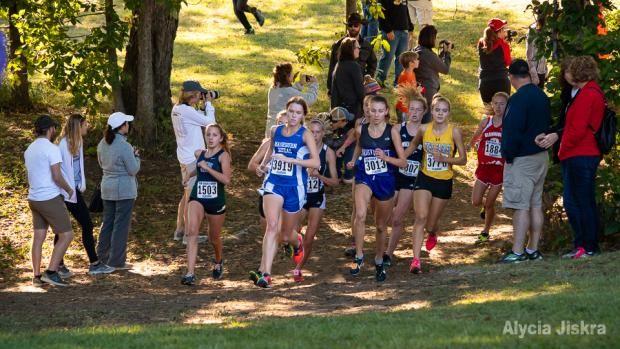 Shufelberger continued an impressive early season, lowering her career-best mark and becoming the first Kansas girl to run under 18:00 for the 2018 season. Shufelberger and Manhattan's Clara Mayfield battled for the lead through nearly two miles before Shufelberger pulled away to win the girls gold division in a time of 17:59.7.

It's the third time in four weeks that the dynamic duo has exchanged the state's top time. Liberty (Mo.) senior Madelynn Hill surged late to place second in 18:08.9, and Mayfield settled for third in a career-best time of 18:20.6.

Shufelberger, who has won all three of her races this season, has now run the third fastest time ever at Rim Rock Farm for a Kansas girl. Mayfield's finish puts her at the fifth best time ever for a Kansas girl on the famed course. Shufelberger also nearly cracked the top 50 times in the United States, currently sitting at No. 53 in the most recent MileSplit rankings.

Three Kansas girls in the top four at Rim Rock is a pretty heady feat. The trio certainly has put themselves on the map in Kansas cross country annals if you consider that taking their best times into account - Beach ran 18:25 to win state last year - they have an average time of 18:14.7 at Rim Rock Farm.

That's the second fastest average for 5K ever among a Kansas trio, trailing only the 17:44.7 average that Molly Born, Cailie Logue and Emily Venters put up during their historic 2016 season when all three were ranked in the top 10 of all U.S. runners.

Shufelberger and Mayfield are likely to see each other a lot this season as both run in the Centennial League. In addition to the league meet on Oct. 13, they will likely be paired at the regional meet on Oct. 20 and a potential Rim Rock rematch at state on Oct. 27.

In the boys' gold race, Yates Center's Splechter reaffirmed his dominance of Kansas distance running by posting a third place finish in a time of 15:18.7. It's the second fastest time ever by a Kansas boy at Rim Rock Farm, trailing only the 15:13.18 by Washburn Rural's Jacob Morgan in 2012.

Splechter's finish is the fifth fastest among all runners ever at Rim Rock Farm, which not only hosts the mid-season Classic, but also hosts the 3A/5A/6A state championships in late October. In other words, the best of the best have run at Rim Rock for many years, and Splechter has run faster than nearly every one of them.

Baxter Springs' JP Rutledge is pretty good, too. He placed second to Splechter at the Missouri Southern Stampede last week and followed that up this week with a fifth place finish (15:35.4) at the Rim Rock Classic.

Tim Sindt of Ankeny (Iowa) won the boys' gold race with a course record time of 15:10.7, while Dylan Schubert of Thompson Valley (Colo.) was second in 15:17.7 and Splechter was third.

Mill Valley's girls and St. Thomas Aquinas' boys were the top Kansas teams in the gold division, which is considered the elite division at the Rim Rock Classic.

Mill Valley tied Johnston (Iowa) for second, but settled for third based on the sixth runner tiebreaker. Freshman Katie Schwartzkopf, running at Rim Rock Farm for the first time in her high school career, put up a pretty remarkable fifth place finish in 18:39.4 to lead Mill Valley, which also got a 25th place finish from Molly Ricker (19:17.3). Morgan Koca (19:37.4) and Delaney Kemp (19:37.6) finished 36th, and 37th, respectively.

Ethan Marshall, the Kansas class 5A state champion last year, led St. Thomas Aquinas to third place in the boys gold team standings. He finished 12th in 15:53.9 and was the only individual medalist for the Saints in this year's meet, though the squad did put up a 51 second pack time.

Mill Valley's boys were eighth and upstart Lawrence Free State was 11th in the boys' gold division. Legend (Colo.) won the meet with 171 points, while Rockhurst (Mo.) was second at 182 and St. Thomas Aquinas third at 190.

In other races at Rim Rock Saturday:

Freshman Tori Wingrove of Blue Valley was the top individual finisher from Kansas in the girls crimson division, placing third in a time of 19:38. Fellow freshman Ava Wardlaw of Olathe West was fourth at 19:41. Eisenhower won the girls' crimson division with 157 points.

Three Kansas girls put on a pretty good show in the girls' blue race before Renee Trout of Independence broke away for the win in a time of 19:29.6. Riley Hiebert of Eudora was second in 19:36 while Hannah Burks of Beloit placed third in 19:39. Buhler scored 180 points for a narrow, six-point victory over Eudora.

Freshman Tanner Lindahl of Buhler introduced himself nicely to the top rung of Kansas distance running, winning the boys' blue division in a time of 16:23.8. It was good enough for a 26 second win over a pretty good runner in Justin Hodge of Hiawatha, a sophomore who placed fifth at the class 3A state meet last year. Hodge was second on Saturday with a time of 16:49, just one second ahead of third place finisher Cormick Logue of Girard.

In other meets this week:

Juniors Alex Cannady and Tyler Stevenson of Central Heights posted a 1-2 finish, leading a dominating performance by their team at the Ramsey Invitational, hosted by Prairie View High School. Central Heights had seven runners in the top 10. Cannady's winning time was 17:21, followed by Stevenson at 17:38. The girls race was won by Louisburg's Trinity Moore in an exciting finish line battle with freshman Lily Meyer of Central Heights. Moore got the win with a time of 20:50.08, while Meyer was just a hair behind in 20:50.10. Louisburg also won the team title by a slim margin, edging Anderson County by four points.

At the Goddard Invitational, freshman Sawyer Schmidt of Augusta won the boys' varsity race in 17:53.40 and junior teammate Brice Helton was second in 18:11.70. The girls' title went to Maddie Reed of Wichita Collegiate in a time of 21:42.90. Wichita West's boys and Valley Center's girls won the team titles.

Andrew Stowers of Olathe South (17:55.90) and Darian Hudgeons of Paola (21:12.94) won the boys' and girls' individual titles at the Ottawa Invitational. The team champs were Olathe South's boys and Lee Summit West's girls.