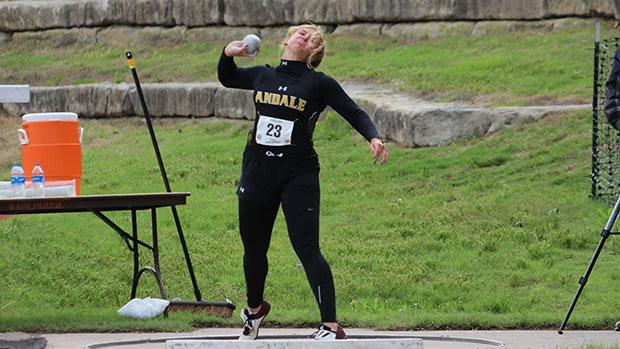 Andale senior Katelyn Fairchild won the class 4A girls state championship in the shot put and javelin. Her throw of 170-0 in the javelin set an all-class state record. (Kansas MileSplit photo by Alex Walters)

Read additional detailed coverage of the 3A/4A state championships in the blog that was updated throughout Friday's meet.

It took Katelyn Fairchild just a little under 45 minutes to write her way into Kansas Track and Field lore.

The senior from Andale - already well known as one of the greatest throwers this state has ever seen - launched the javelin 168-11 on her first throw of the class 4A girls javelin to set an all-class record less than an hour after the class 3A/4A championships opened Friday at Wichita State University's Cessna Stadium.

By the time the competition was over, Fairchild had pushed the record to 170-0, leading a 1-2-3 finish by Andale in the event. Her sister, McKenzie Fairchild, posted a career-best throw of 159-7 to place second, and Samantha Marx threw 145-7 for third.

Andale scored 137.5 points to easily win the class 4A girls state championship. Paola was second with 70 and Eudora grabbed the last podium spot with 61.5 points.

As expected, Andale's field events put up a big...make that, huge...score that really put the team title away early.

By the time all the field events had been scored, Andale had amassed 92.5 points in those events alone.

Andale also won the girls 4 X 100 and 4 X 400 relays. Cali Kerschen was the runner-up in the 100 hurdles. All together, the Indians added another 45 points on the track.

Andale's dominance over-shadowed a strong effort by Paola - which got runner-up finishes from Marina Johnson (800), Darian Hudgeons (3200), Maggie Kauk (long jump) and its 4 X 400 relay. Eudora had a pair off silver medalists in Chloe Thakker (high jump) and its 4 X 800 relay.

Andale's excitement in the girls team race was tempered, however, by heartbreak for the boys' team. Andale's boys also had been favored to capture a team title.

But midway through Thursday afternoon, Louisburg's Tom Koontz went to work. First, he won the 110 hurdles, ran a leg on the runner-up 4 X 100 relay and finished second in the 300 hurdles - the latter of which put his team into the lead for the first time all day. And Luke Faulkner bit into Andale's dominance in the pole vault, finishing second (14-6).

The score at that point in the meet was Louisburg 68.5, Andale 66 with three events to go. Andale seemed to get the lead back when 800 meter runner Zach Winter placed fourth, but Louisburg countered that finish when Jaden Vohs - seeded 14th going into the event - placed sixth overall.

It meant that Louisburg held a slim lead of 71.5 to 71 over Andale heading into the last event of the day - the 4 X 400 relay. Louisburg, though, was too good on this day; the squad jumped out to the lead after one leg, held on for second through three legs, and ultimately finished third. Andale finished in seventh.

Buhler finished third in the 4A boys team standings with 53 points.

In class 3A, Southeast of Saline's boys and Smoky Valley's girls rolled to lopsided victories.

Southeast of Saline scored 84 while Girard was second at 55 and Perry-Lecompton third with 50 points.

Eureka was the state runner-up with 43 points, while Chaparral and Colby tied for third with 33.

Ames Burton of Riley County won two state titles in her farewell to Kansas high school competition. First, she took the shot put with a throw of 41-3.5, then about an hour later, she was crowned state champion in the discus (147-2).

You've already read about the Fairchild sisters from Andale who helped lead their school's dominating win in the class 4A girls team race. But there were some other family celebrations during Friday's 3A/4A state championships.

Here's a few that I knew about:

* Loren Faurot of Scott Community won the 3A boys pole vault, taking over the title from his brother, Marshall, who won the same event in 2019. Loren cleared 14-0 to win the 2021 title.

* Siblings Hayley Trotter and Zach Trotter of Clearwater won class 4A 800 meter state titles. Hayley won the girls race in 2:18.84 and Zach powered through the homestretch of the boys' race to win in 1:57.27.

Read more detailed coverage of the 3A/4A state championships in the blog that was updated throughout Friday's meet.