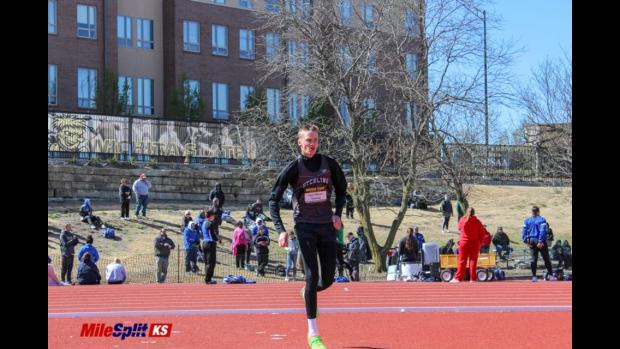 Tyus Wilson of Sterling cleared 7-3 to tie for the best high jump in the United States this year. (KS Milesplit file photo, 2018)

What's so great about Kansas high school track and field?

In the meantime, we have high jumper Tyus Wilson, who cleared 7-foot-3 to win the James Thomas Invitational in Hillsboro on Friday, moving him into a tie for the best high jump in the United States this season. That jump is a career best for the Sterling senior, a University of Nebraska commit who previously was No. 2 in the United States with a jump of 7-2.

And we have meets like Friday's Bob Camien/Claudia Welch Invitational at Seaman High School to remind us that this state's track and field athletes have plenty of moxie. Year in and year out, the Camien/Welch Invitational lands on everybody's Top Five list of meets in Kansas. This year's field was a little smaller, but there were still some big performances.

The highlight of that meet was a distance dual between the reigning king in Kansas and a freshman who appears capable of taking distance running in this state to even greater heights over the next three years.

Manhattan senior Daniel Harkin - the two-time Gatorade Runner of the Year in Kansas - won a great battle against Shawnee Mission North's Micah Blomker. Harkin, who surged to a five-second lead three laps into the race, goes to No. 2 in Kansas for the current season, winning the fight with a time of 9:11.31. Blomker was game to the end - finishing in 9:15.32.

Everyone else was nearly a half lap behind. Harkin's time is a career best and lands him at No. 66 in the U.S. rankings, while Blomker - who finished second at the class 4A cross country championships running for Bishop Miege last fall -- takes over the No. 3 spot in Kansas and No. 2 time in the United States among all high school freshman (No. 120 among all grades).

From the longest events to the shortest: The Camien/Welch Invite also featured some exciting sprint matchups.

Ka'Liyah McGinnis of Olathe North won a close finish with Leavenworth speedsters Wynter Ramos and Dhakiya Blake in the 100 meters. McGinnis - who already had the state's best time of 12.18 - won in 11.81, while Ramos finished in 12.06 and Blake was third at 12.07.

Those are the top three girls 100 meter times in Kansas this season. McGinnis also jumps to No. 15 in the United States, while Ramos and Blake are just inside the top 200 in the nation right now.

Malik Benson of Lansing continued to run roughshod over most of his Kansas competition. The senior cruised to wins in the 100 meters (10.55) and 200 (21.97). His 200 meter time ties Wichita Heights' Elijah Mosley for No. 1 in Kansas, while his finish in the 100 is a career best and currently No. 3 in Kansas.

Some other outstanding performances at the Camien/Welch Invitational Friday included:

* Rossville junior Briar Gillum threw a career-best 40-7 to win the girls shot put. It's the fifth best throw in Kansas this season. She remains at No. 2 in class 3A, but moves her a bit closer to that division's leading thrower, Ames Burton of Riley County (41-11).

* Santa Fe Trail junior Brett Schwartz launched a career best throw of 183-11 in the discus (beating his previous best by nearly a foot and a half) to top Manhattan senior Jaden Magana - the No. 2 ranked thrower in class 6A. Magana also improved his career best to 174-2, about five feet better than he threw two weeks ago.

* Manhattan, the No. 1 ranked team in class 6A boys, kept the train rolling with career bests by senior Darius O'Connell in the shot (61-3, improving his own state-leading mark), and senior Jaden Magana in the javelin (188-5, No. 3 in Kansas and No. 1 in class 6A)

* Olathe North's girls briefly took over the state's No. 1 spot in the 4 X 100 relay, winning a hold-your-breath finish against Leavenworth. Olathe North crossed at 49.22 while Leavenworth was runner-up in 49.26. Those were the two best times in the state until Olathe West eclipsed those times later on Friday; Lansing (49.89) finished third at the Camien/Welch Invite and sits at No. 5 on the season.

* Lansing's boys lowered their own-state leading time in the 4 X 100 relay, winning Friday in 42.79. Benson ran the anchor leg for his fourth gold of the meet.

The distance runners are starting to come on as four state-leading marks were set in the past week.

On April 22, St. Thomas Aquinas junior Logan Seger clocked 9:10.85 to win the Barrier Breakers Invitational at Lawrence Free State High School. The next day, Southeast of Saline junior Dylan Sprecker, grabbed the state's fastest 1600, winning the Abilene Invitational in 4:18.84. Riley Vandaveer of Olathe South then took the top spot on Saturday when he won the high school boys 1600 at the Trials of Miles in Leavenworth, clocking 4:18.04.

On Friday, Quenton Walion of Gardner-Edgerton took care of the 800. He won his team's home meet in 1:54.02 to take over the state's top spot in that event.

Taylor Briggs of Chapman notched the top girl's 1600 on April 23, clocking 5:01.07 at the Abilene Invitational. That time, however, was beaten Saturday afternoon by Blue Valley Northwest senior Riley Beach at the Trials of Miles in Leavenworth; Beach clocked the state's first sub-5:00 1600 by a Kansas girl this season when she won in 4:58.53.

Others grabbing state-leading times or marks this past week include:

Kansas track and field is getting better and better with each passing week. League meets are less than two weeks away. Then regionals...and state. Ah, it's good to be back.