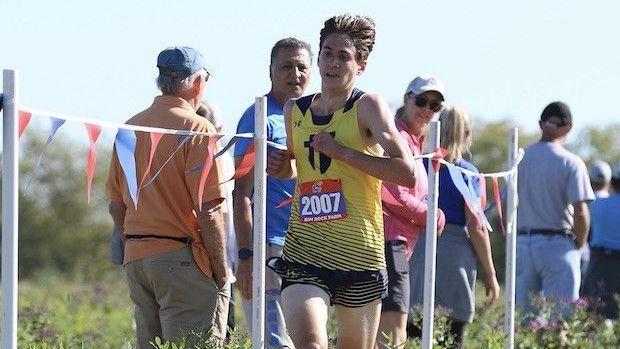 Olathe North's Anjali Hocker-Singh wrote another chapter in what has the makings of a storybook high school career, while Mill Valley's Katie Schwartzkopf crafted a pretty nice bookend to her own prep years as the class 5A/6A Kansas cross country championships wrapped up Saturday at Four Mile Creek Resort near Augusta.

Just a little over 372 days ago, Hocker-Singh was one in a pack of young lions that was putting an indelible mark on Kansas girls cross country. She separated herself from that group when the then-freshman put the first two victories on her high school resume -- regionals and state.

Saturday, she further established herself as the most dominant female distance runner in Kansas right now, clocking 17:45.6 to successfully - and easily -- defend the class 6A girls state championship. Hocker-Singh is 2-for-2 at the state cross country meet; two more and she'd be just the seventh Kansas runner ever to win four state titles.

Hocker-Singh's teammates - sophomore Shea Johnson (18:11.6) and senior Kaylee Tobaben (18:20.3) - finished second and fourth, respectively, to give Olathe North a huge early lead for the team title. But Olathe West put five runners in the top 18 en route to a 52 point team score and a comfortable 16 point win over their cross-town rival.

Olathe West's 41-second pack time was just off the 34 second gap they put up to win the 6A title last year. Like last year, all five scorers - as well as freshman Elizabeth Browning (21st, 19:43.7) -- return next year to go for a three-peat.

Schwartzkopf's repeat title at the 5A cross country championships came three years after she first won the state championship as a freshman in 2018. She was the class 6A state runner-up in 2019 and class 5A runner-up a year ago. Six points in four years at the state meet...not too bad, eh?

She was a picture of power as she chewed up the flat Four Mile Creek Resort course in nearly perfect weather conditions, crossing the finish line in 17:51.8 - 42 seconds ahead of runner-up Grace Hanson of Kansas City Piper (18:33.3), who is a junior.

Mill Valley freshman Megan McAfee placed 15th, giving the Jaguars a commanding lead in the chase for the team title. They had to hold their breath, though, as St. Thomas Aquinas and Great Bend staged a mad dash to catch them.

Other than Krebs, St. Thomas Aquinas had only one other medalist: Sophia Spinello nabbed 20th in 19:47.0. But Quinn Babcock (23rd), Alexis Huddin (24th) and Anna Dicarlo (27th) were pretty close to getting on the medal stand.

Senior Logan Seger won the individual title in a smooth ride of 15:39.2, while senior teammate Ashton Higgerson was the runner-up in 15:51.1. When junior Colby King crossed the line in fifth (16:03.0), it seemed as though St. Thomas Aquinas would once again make a shambles of the class 5A field.

But it took more than 40 seconds for another St. Thomas Aquinas runner to hit the line, and at the state meet, that's plenty of time to make up some ground. Blue Valley Southwest, Bishop Carroll and St. James Academy came charging home, each chasing a podium spot with an outside shot at catching the Saints.

None of that, though, was enough. St. Thomas Aquinas scored 55 points while Blue Valley Southwest settled for the runner-up spot at 69, and Bishop Carroll scored 91 for third. St. James Academy had 96 points, just missing the podium.

Great Bend's Kaiden Esfeld was the other top five finisher, grabbing third in a time of 15:54.7.

Top-ranked Olathe South held serve in the class 6A boys team race, scoring 70 points to win by 30 points over Manhattan, which finished as runner-up for the second consecutive year.

Shawnee Mission North's Micah Blomker dominated the class 6A boys race. He sprinted out to the front of the pack and gradually pulled away, winning in a comfortable time of 15:25.3. Blomker, now a sophomore, was the state runner-up in class 4A a year ago.