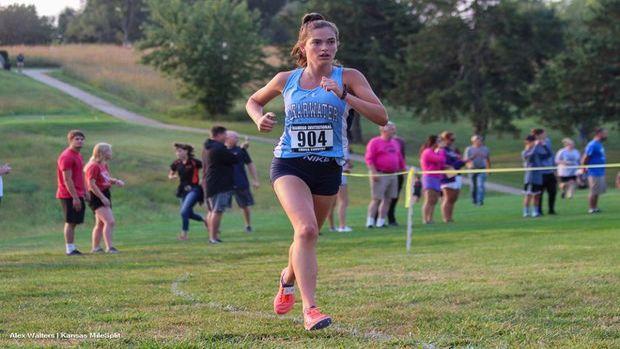 Clearwater's Hayley Trotter has proved to be a serious contender in 4A.
(Photo By Alex Walters)

As an old saying goes, the grass is always greener on the other side of the fence. Going into this week, that certainly looked to be the case. Neighboring states had some big-time meets lined up that often snag the best Kansas teams looking for stiff competition. Missouri's Southern Stampede, Iowa's Heartland Classic, and Oklahoma's Cowboy Jamboree draw big crowds and hordes of elite runners.

However, in a world where high school sports are becoming increasingly nationalized, Kansas schools opted for something a little more traditional. While a handful of teams travelled across state lines, most decided that there's plenty competition right at home in the Sunflower State.

One meet that has been on the upswing in recent years has been the Hays Invitational. FHSU's beautiful Sand Plum course played host for 1A & 2A state last fall, and will do so again this season. Being a preview of the state course is surely an added bonus.

Manhattan cruised to the team crowns for boys and girls. Edging out Garden City and Dodge City, respectively. Ben Mosier won the individual title for the Indians, outlasting Salina Central's William Griffith. On the girls' side, it was Dodge City's Serenity Larson who took the win, breaking up what would have been a perfect score for Manhattan.

In the small-school division, Hoisington's boys raised some eyebrows for the win, and Norton's girls placed themselves back in the 3A conversation. Individual winners were Meade senior Elijah Zortman (17:42) and Colby sophomore Kathie Chavez (20:51).

The fastest times of Thursday came from the Buhler Invitational. Jentrie Alderson continued her revenge tour, winning in blowout fashion in 19:36. Her Southeast of Saline team didn't quite have the firepower to match the winning team from Great Bend. The boys race was more of a battle, with Dylan Sprecker striking back at Tanner Lindahl after last week's defeat in Wamego. Sprecker crossed in 16:14, Lindahl in 16:25, and Great Bend's Kaiden Esfeld (no slouch himself) was third in 16:35.

On Saturday, there were a few highlights from the Circle Invite. Sawyer Schmidt of Augusta dropped a 15:27 to lead the way. His Orioles would win as well. On the Girls' side, Clearwater's Hayley Trotter ran 19:16 for a huge win of her own. Rose Hill would put 5 in the top-10 to win the team title.

Other notable winners from this week were Chesney Peterson (Stanton Co), winning a sneaky-good Hugoton meet in 19:04, and Ben Shryock (Free State), who dismantled a loaded field at Baldwin in 15:57.

Looking ahead, the first day of fall is this week. Those schools out looking for green pastures won't be finding any now. Most of that green will be fading to gold. If you're searching for elite competition, look no further than Rim Rock Farm on Saturday. The list of teams can be found HERE, and it looks to be a good one.

Another noteworthy tidbit, KSHSAA will have their annual enrollment count this week, with classifications and regional assignments soon to follow, so keep an eye out for those!