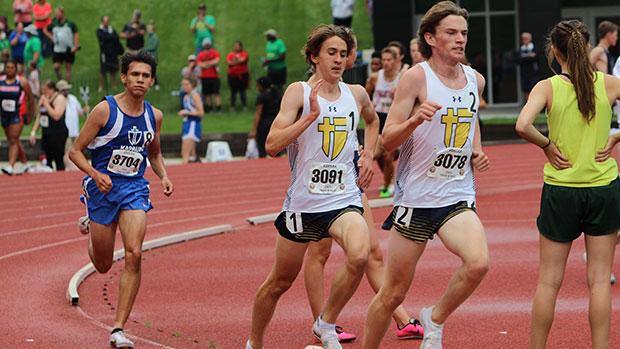 Mill Valley sophomore Nen Matlock won state titles in the 400 and 800 meter runs within about 90 minutes of each other, helping his team complete a late-afternoon rally for the Kansas class 5A boys team championship Thursday at Wichita State University's Cessna Stadium.

St. Thomas Aquinas, powered by state champions Logan Seger (1600) and Tommy Hazen (3200), and a runner-up finish by its 4 X 800 relay squad, had 50 points by mid-afternoon, good for a 23-point cushion over Kapaun Mt. Carmel and nearly 30 points north of Mill Valley.

But Mill Valley rallied behind Matlock's dual wins and a runner-up finish by Brian Casper in the javelin. Mill Valley's win also was keyed by a 2-3 finish in the pole vault by Kyle Mayfield and Garrett Beashore, both of whom cleared 13-6.

Two-thirds through the meet, Aquinas had built a 34 point lead over Kapaun-Mt. Carmel en route to a team total of 92 points. Kapaun Mt. Carmel hung for second with 55 points while Mill Valley rallied for third place, scoring 53 points.

Manhattan had less than its best day, but it was still plenty to win the 6A boys title. Darius O'Connell won the shot put - the last event scored in the meet Thursday -- to finally seal his team's win. Manhattan finished with 66.5 points while Blue Valley was the runner-up with 54.

Blue Valley's finish was led by Benjamin McAlister, who won the discus (174-8) and was runner-up in the shot put (56-2.5); and Dylan Arnold, who was second in the pole vault (14-0). But it lost a huge opportunity for points when its No. 1 rated 4 X 400 relay squad was disqualified in the finals.

Shawnee Mission Northwest and Gardner-Edgerton tied for third place in the 6A girls team standings, both with 56 points.

More in-depth coverage of the class 5A/6A championships is available in a blog maintained by Kansas MileSplit during Thursday's events.

Gardner-Edgerton senior Kendra Wait's farewell to Kansas Track and Field is the stuff of legends. Despite being the underdog in an event she won two years ago - the 100 meters - Wait mustered a great start and out-ran Olathe North's McGinnis.

She followed that up with wins in the long jump (18-5) and shot put (41-2.5). Then, she waited...and waited...and waited while her competitors in the pole vault slowly dropped out. Wait, who had passed to 11-0, was the only competitor left in the pole vault by the time she made her first jump. All she had to do to win the state title was to clear her first height - which she did.

She then missed three times at 11-6, but it didn't matter. On a shortened state meet schedule, Wait's effort was remarkable.

Her farewell, however, was a stark contrast to that of Lansing's Malik Benson, who entered the state meet No. 1 in the 200 and long jump, and No. 2 in the 100. But Benson, whose season-best 25-2.25 in the long jump was the third best mark in the United States this season, never got to compete, presumably due to injury.

Thursday's meet got off to a late start due to storms in the Wichita area. Field events began at 12 noon, four hours after they were originally scheduled. Running events also began about that time, about an hour later than initially planned.

Even so, the meet finished just before 8 p.m., not much later than it would have finished with a normal start. Kudos to Heartland Timing, the lead timing company, which I'm sure had a pretty hectic day keeping up with the day's heavy demands to get the 5A/6A meet in.