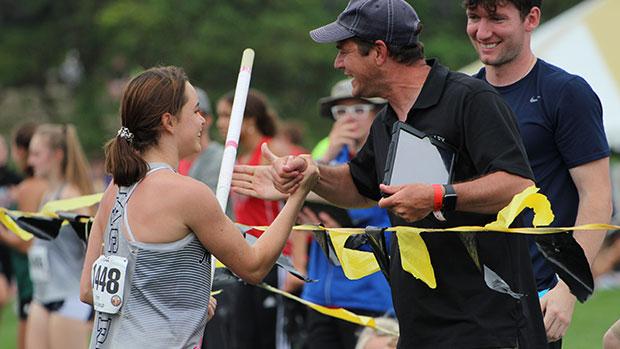 The following is a live blog posted on Kansas MileSplit during the class 5A/6A Kansas Track and Field championships, May 27 at Wichita State University's Cessna Stadium.

An unfortunate beginning: Weather has caused a temporary delay to the beginning of the 5A/6A state championships. Two years ago, weather delays caused the meet to go into Sunday before they were completed. Last year, the pandemic caused a complete cancellation. KSHSAA will post an update at 9 a.m. on getting this year's meet started.

Still waiting. KSHSAA will post its next update at 10 a.m. We'll keep posting updates throughout today's meet...hoping we get started soon, or else it's going to be a long night!

Well, the early storyline on this state championship already is the weather. The class 5A/6A state championships are still in a holding pattern. Severe weather is in the Wichita area. KSHSAA will issue its next update at 12 noon today. It will be interesting to see what this does to a schedule that was already compressed to accommodate a one-day meet.

We are underway! The field events scheduled for 8 a.m. are now at 12 noon, and other field events moved up accordingly. The 3200 meter runs are on the track -- about an hour later than their originally-scheduled start. First up: 5A girls 3200.

And we have our first state champion of this year's meet -- well, for that matter, in two years! Hope Jackson of Bishop Carroll successfully defends her 2019 state title with a 78 second last lap to pull away from Maize South's Alexa Rios. Jackson finishes in 10:59.76, while Rios is the runner-up at 11:09.14. Jackson is also the two-time class 5A state champion in cross country. It's Rios' highest finish ever at a state meet.

Lawrence Free State's Ben Shryock won his first state title, finishing in 64 seconds to edge Shawnee Mission North's Micah Blomker. Shryock, a junior, clocked 9:15.00, while Blomker, a freshman, is second at 9:16.21. Kansas Gatorade Runner of the Year Daniel Harkin of Manhattan, the 2019 champ in this event, was on Shryock's shoulder with a lap to go but struggled to finish in 1:16 and ended up in seventh place.

First field event champion is in the books: JahnAsia Anderson of Seaman wins the class 5A girls shot put with a throw of 37-7. That's a personal best by more than 1 1/2 feet for the senior. Most other events that started at noon are in the final rounds.

We lost our Internet connection for nearly two hours...so, let's get caught up! Lily Fleetwood of Mill Valley set a class 5A state record in winning the girls pole vault at 13-0. She beat pre-meet favorite Paris Bond of St. Thomas Aquinas, who cleared 12-0. Bond, however, has had a great state meet: she won the triple jump with a leap of 37-9.5 and the high jump at 5-6. The class 6A girls' javelin also went final; Aubrey Duncan of Lawrence Free State is your state champion with a throw of 142-10.

The big story on the track is Lansing's Malik Benson. He did not start in the 100 meter prelims, which likely means we won't see anything from the senior standout at this meet. He was on a short list of class 5A sprinters who were likely to light up the track today, but now it looks like he's out for the meet. Perhaps most disappointing is that we won't see him in the long jump, where his season-best of 25-2.25 was No. 1 in Kansas and No. 3 in the United States. Kansas' oldest state meet record appears to be safe: 24-11.75 by Wichita South's Veryl Crawford in 1974.