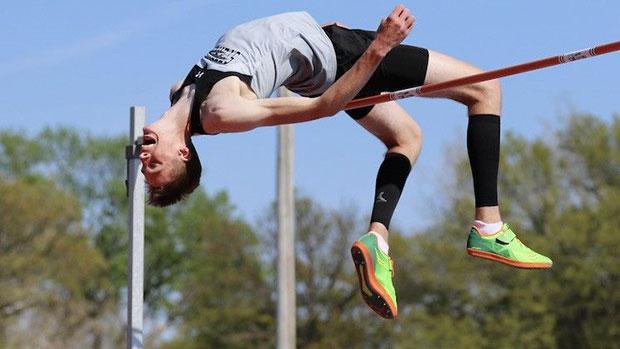 Tyus Wilson of Sterling, shown here clearing 7-0 at the Ellinwood Invitational, could break the 2A and all-class state records in the event this weekend.

We're doing our annual previews of the Kansas State Track and Field Championships differently this year. Instead of one story for each classification, we will publish one story previewing each day of competition. Today, we will take a look at the class 1A/2A championships, which take place Saturday.

Ah, the sprints are going to be exciting.

The title of the division's fastest boy or girl is not the only prize up for grabs when the class 1A/2A state track and field championships get rolling on Saturday. The winners of the 100 meter dash may also be taking home state records.

The record that is in most jeopardy is the class 1A girls 100 meter title. Kiowa County junior Addi Heinson has a season-best of 11.99, well ahead of the 1A state record of 12.30 held by Logan's Kelly Pakkebier (1975) and Grinnell's Beverly Heier (1983). Heinson has run faster than the state record seven times this season, including last week at the regional meet.

Among the other 100 meter races at this year's meet:

* In class 2A girls, Garden Plain junior Brooke Hammond has a season-best of 12.20, within striking distance of the class record of 12.10 held by Garden Plain's Kayla Pauly (1998) and Sublette's Debbie Winter (1981)

Several other records may go down at this year's meet:

It's a dead heat for the team title in this division. Wichita County, Oakley, Trego Community and Garden Plain are about as even as four teams could get. Hillsboro and Hoxie aren't far behind them.

Wichita County's Sheldon Whalen is a pre-meet favorite in the 110 hurdles and 300 hurdles. Oakley's Ethan Abell is No. 1 in the 100 and Cody Zimmerman No. 1 in the 800, and they've got the top-ranked 4 X 100 and 4 X 800 relays. Trego Community distance runner Wyndom Giefer is the one to beat in the 1600 and 3200, and teammate Owen Day has class 1A's top throw in the javelin. Garden Plain's Jack Haukap and Arden Rex are top two contenders in the shot put and javelin, respectively.

This team race comes down to which school picks up the important fifth through eighth places. I'll take the team that appears to have the most depth. Pick: Trego Community

The only team that could challenge Garden Plain for the team title is Stanton County and distance superstar Chesney Peterson, who is the division's best in the 800, 1600 and 3200. Valley Heights is a podium hopeful, led by thrower Emma Yungeberg (No. 1 in the javelin, No. 3 in the shot put and discus). I don't think they can match Garden Plain's depth and top-end strength. Pick: Garden Plain

Madison is likely to build a big early lead with Casey Helm, who is ranked No. 1 in the shot put and discus; and Kelton Buettner in the triple jump and long jump. Buettner is likely to boost his team's early lead in the hurdles, where he's ranked No. 1 in the 300 hurdles and No. 2 in the 110 hurdles. Bryson Turner is a top 3 hopeful in the 100 and 200.

After that, it's anybody's guess. Golden Plains' Emma Weiner is ranked No. 1 in the 1600 and 3200, and Hodgeman County's Kaylee James is No. 1 in the 300 hurdles (No. 3 in the 100 hurdles). Doniphan West's Elle Williams and Chloe Clevenger should score big points in the distance races, and they also key the No. 1 ranked 4 X 800 relay. Pick: Kiowa County

I suspect that I'm not alone in being anxious to see Tyus Wilson in action. Entering this week, he's tied for the best high jump mark in the United States, 7-foot-3 about a month ago at the Hillsboro - James Thomas Invitational. He's only failed to clear 7-0 once this season - at last week's regionals - but I imagine he's wanting to cap his brilliant career with a great effort at the state meet. No doubt the crowd will provide a shot of adrenaline.

An interesting side story here: Loudermilk has cleared 6-10.5 this season, which in any other division, would make him a heavy favorite for the state title. He'll certainly get Wilson's attention and could be in a position to pull off a monumental upset.

Wilson and Loudermilk also will compete in the long jump at 8 a.m. Wilson's season-best of 21-11 is also the best in class 2A this spring.

I've got to say that I'm excited to see the Stanton County sophomore competing in her first state track and field meet. She's one of the top five female distance runners in Kansas right now, and will look to add three track titles to the cross country championship she won last fall.

Blaufuss is the only Kansas athlete to have thrown further than 200 feet this season. He currently sits at No. 5 in the United States with his season best of 208-7 to win the Lyon County League meet two weeks ago.

Blaufuss was the class 1A state runner-up in the javelin in 2019, which is the only state medal he has won. He's hoping to add gold to that silver this time around.

Heinson burst onto the state scene as a freshman with runner-up finishes in the 100 and 200, and fourth place in the 400 during the 2019 state championships. COVID-19 wiped out what likely would have been her ascension to the top of class 1A sprinting last year.