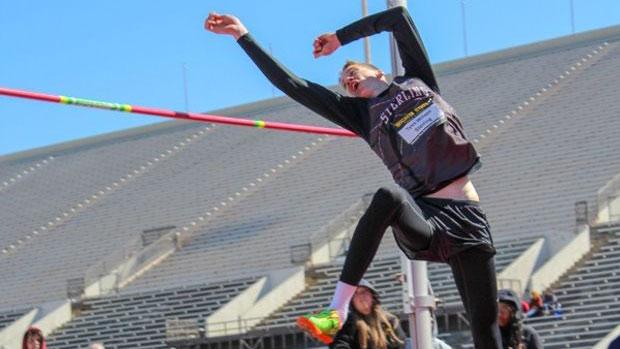 Wind and rain threatened to put a damper on the third week of the Kansas high school track and field season, but it didn't seem to matter as more than half of the top marks in six classifications were set between Tuesday and Friday.

Half of the state-leading marks in the boys' division - all classifications combined -- went down in Week 3, including the first 7-foot high jump in the state this year. Sterling senior Tyus Wilson - whose previous best in a Kansas high school meet was 6-11 - topped 7-foot to win his team's home meet.

Wilson, a two-time state high jump champion who has already committed to the University of Nebraska next year, has a personal best of 7-1 that he cleared to win the AAU West Coast Junior Olympic Games in Summer, 2020.

Wilson's feat was matched across the state by athletes in several other events as 15 of 36 state leading marks were set this week, which represents 42% of the top marks (all classifications). That includes six new marks by Kansas girls, and nine by Kansas boys.

Digging a little deeper, there were 115 performances by Kansas athletes that landed them in the top spot in their respective classifications. That includes 61 girls' marks, and 54 boys' marks, or a whopping 53% of classification-leading marks in Week 3.

For the guys, those moving to the top of the Kansas rankings (in addition to Sterling's Wilson) include:

* Ethan Reynolds, senior, Gardner-Edgerton, 22.07 to win the 200 meters at the Olathe Invitational.

* Micah Blomker, freshman, Shawnee Mission North, 9:26.15 to win the 3200 at the Blue Valley Relays. Blomker is a surprise addition to class 6A this spring; he was the state runner-up for Bishop Miege in last fall's class 4A state cross country championships, missing out on a state title by less than 3 seconds.

* Myles Benefield, senior, Olathe East, 39.93 to win the 300 hurdles at the Olathe Invitational. He's the first Kansas boy to dip under 40 seconds in that event this year.

* Adrian Dimond, junior, Mill Valley, 23-1 to win the long jump at the Olathe Invitational. He's the first Kansas boy past 23 feet this season.

* Max Blaufuss, senior, Olpe, 198-8 to win the javelin at the Osage City Invitational. Blaufuss was the class 1A state runner-up in 2019.

For the girls, the six state-leading marks that went down include:

* Lily Fleetwood, senior, Mill Valley, 12-6 to win the pole vault at the Olathe Invitational. Kendra Wait of Gardner-Edgerton, a senior, also cleared 12-6 (tying the state's top mark) but settled for second place based on misses. Wait also has the top mark in class 6A.

* Wait, threw 42-11 to win the shot put at the Olathe Invitational, the top mark in Kansas this season.

You likely noticed a trend in those listings: The Olathe Invitational and the Blue Valley Relays were rocking this week. Counting the all-classification top marks, those two meets accounted for a combined 22 marks that hit No. 1 in either class 5A or 6A (boys and girls).

Among the highlights in Olathe, Olathe North sophomore Ka'Liyah McGinnis came up two-hundredths of a second short of Ervin's state-leading time in the 100, clocking 12.21 for No. 2 in Kansas and No. 1 in class 6A. Gardner-Edgerton's Wait was the runner-up at Olathe, clocking 12.40 (No. 5 in Kansas right now).

At the Blue Valley Relays, Blue Valley Southwest's Ervin was pushed to her state leading time by St. Thomas Aquinas' Allen, who was eight-hundredths behind in 12.27 - good for No. 4 in Kansas after three weeks. Ervin also won the 200 in 26.10, good for No. 1 in class 5A so far this season.

Also around the state:

There were some pretty impressive pole vaulters this week, as well. The best in Kansas in week 3 was Blue Valley West's Evan Schmidt, who cleared 14-7 to win the Blue Valley Relays (there's that meet again!). Other Kansas boys winning this week - and grabbing the top spot in their respective classifications - were Tristen Porter of Wichita County (12-6, class 2A), and Loren Faurot of Scott Community (14-0, 3A).

Two other Kansas sprinters swept the 100 and 200 in classification-leading times. Bennington's Jasey Downing won in 12.69 and 26.96 at the Beloit-St. Johns Invitational, and Bishop Miege junior Emijan McCallop clocked 12.61 and 26.43 to win her team's home meet.

Downing also ran a leg on Bennington's winning 4 X 100 meter relay team, which clocked the best time in class 2A this season (52.78).