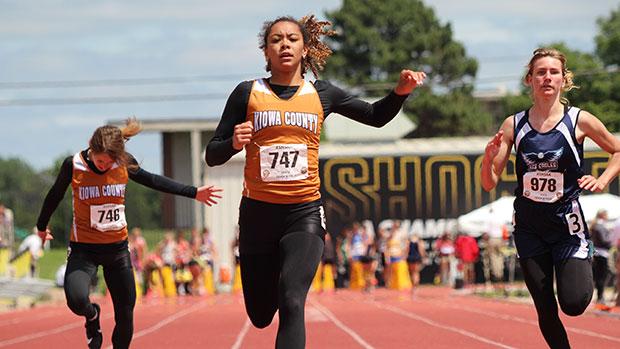 ALSO SEE: In-depth coverage of the individual events and team races in the Kansas MileSplit blog, which was updated throughout the day during the 1A/2A state championships

Nowhere in the schedule for the Kansas State Track and Field Championships is there room for a roller coaster ride.

Yet, that's exactly what the Hanover boys track and field team led us on during the final hour-plus of the class 1A/2A championships Saturday at Wichita State University's Cessna Stadium.

Starting at about 4 p.m., Hanover went from looking like a good bet to win the state championship, to playing catch up, to being in the driver's seat, to a bad break that might cost them the title....and then winning again.

When it was said and done, Hanover did - indeed - win the class 1A boys track and field championship, scoring 55 points to runner-up Madison's 48. They did it the hard way.

By mid-afternoon Saturday, eight teams were bunched up near the top of the team standings. Hanover, which was chasing the top teams to that point, gained the lead just before 4 p.m. when Jacob Klipp placed fourth in the 300 hurdles (41.60) and Jacob Jueneman finished as runner-up in the 800 (2:00.86).

Kelton Buettner then put Hamilton into the team lead when he won the 300 meter hurdles (39.87), capping his third state title of the day. Hanover fell to second while Madison lurked in third.

But Turner turned the tables for Madison. He rallied for a third place finish in the 200, while Jueneman finished seventh. The unexpected turn put Madison into the lead with 48 points and Hanover in second at 47.

Hanover's last chance was in the 4 X 400 relay, where they were seeded No. 9 based on last week's regional times. It meant that Hanover would run out of the slower first heat, rather than with the higher-seeded teams in the second heat.

Needing at least a seventh place finish and two precious points to win the 1A state title, Hanover crushed everyone in the first heat, clocking 3:33.64 - six seconds faster than its seed time and just tenths off of Macksville's top seeded time of 3:33.07.

Beloit-St. John won the second heat in 3:33.05, but Hanover was second, and those eight points lifted the squad to the 1A state championship.

Hanover, which does not have a home track, did not have an individual state champion, but did get runner-up finishes from Colin Jueneman (long jump), Emmitt Jueneman (triple jump), Jacob Jueneman (800) and its 4 X 400 relay (which included all three Jueneman's and Klipp). Hanover scored in every event it was entered in except one.

Considering how heart-wrenching the 1A boys' team chase got, maybe it's a good thing that the other three divisions were snoozers.

Garden Plain swept both team titles in class 2A, the girls winning by a whopping 60 points and the boys winning by 29.

Stanton County's girls - with four-time winner Chesney Peterson leading the way - was the class 2A girls runner-up, with 48 points. Valley Heights - which got two state titles from Emma Yungeberg in the javelin (144-0) and shot put (40-11) and a runner-up in the discus (126-10) - finished third with 44 points.

Kiowa County's girls also made the 1A girls team race a one-sided affair. That squad had 64 points, leading from start to finish. Hodgeman County was second with 35 points, while Beloit-St. John and Decatur Community tied for third, each with 34.

Kiowa County's Addi Heinson was a show-stopper on Saturday. First, she broke the class 1A state record in the 100 when she clocked 12.29 in the prelims, then she followed by winning the state title in the finals (12.59).

The drama in the 1A girls team standings came for second place. Hodgeman County was clinging to second place with 35 points heading into the last event, the 4 X 400 relay. Neither Beloit-St. John's nor Decatur (at 34 points) had a team in the final relay.

But Golden Plain (31 points), Hanover (30 points) and Doniphan West (29.5 points) all had good 4 X 400 relay teams. They all had their eyes on grabbing second place from Hodgeman County.

Hodgeman County opened the door when they failed to place, but Hanover could only muster a seventh place finish (good for two points), and Doniphan West finished in a tie for fifth place (good for 3 ½ points). Golden Plain finished tenth (zero points).

The end result: Hodgeman kept their second place trophy. Doniphan West moved up to 33 points, just one shy of catching Beloit-St. John's and Decatur for the third spot on the team podium. Hanover finished at 32. Stanton County's Chesney Peterson (pictured) was even better than advertised in her first-ever appearance in the Kansas Track and Field Championships.

All of her individual times will put her in the top 3 of times run by Kansas girls during the three days of state meet competition. Her winning time in the 800 is the fastest run by any Kansas girl at this year's state meets.

For more in-depth coverage of many more outstanding individual efforts from Saturday's meet, including Tyus Wilson's record-breaking high jump performance, see the Kansas MileSplit blog where we posted live updates throughout the day during the 1A/2A state championships.