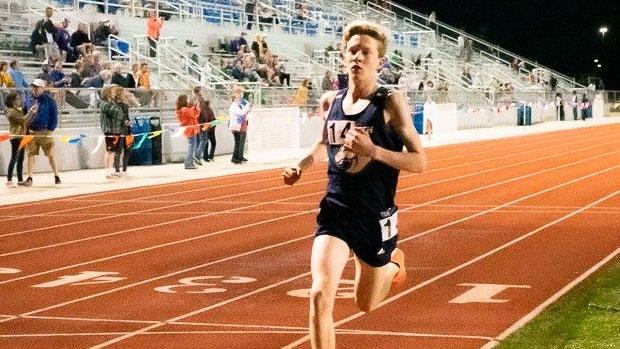 Shawnee Mission North freshman Micah Blomker will match up with Manhattan's Daniel Harkin in the finals of the class 6A 3200 meter run on Thursday. Earlier this season, Blomker posted the second-fastest 1600 meters by a freshman in the United States.

We're doing our annual previews of the Kansas State Track and Field Championships differently this year. Instead of one story for each classification, we will publish one story previewing each day of competition. Today, we will take a look at the class 5A/6A championships, which take place Thursday.

So, Paris Bond of St. Thomas Aquinas has a dilemma.

The dual-event star is ranked No. 1 in class 5A in the triple jump and pole vault, where she has season-bests of 37-8.5 and 13-1 - both set at the regional meet this past weekend.

Problem is, with this year's one-day schedule for the Kansas State Track and Field Championships, both of those events are scheduled to begin at 8 a.m. on Thursday at Wichita State University's Cessna Stadium.

The compressed timeframe for this year's state championships will force many athletes to be strategic in their preparations for the biggest meet of the season.

It's all part of this year's 'normal' at the Kansas State Track and Field championships, which have been split into three days, each with two divisions completing their full schedule, to accommodate safety due to the COVID-19 pandemic.

The class 3A/4A meet will follow on Friday, and class 1A/2A on Saturday.

Bond likely will not be the only field event competitor juggling her schedule in Thursday's 5A/6A meet. And on the track, many athletes will need to figure out new warm-up and rest routines in a schedule that packs 60 races into an eight-hour window.

The distance runners will deal with less rest time than normal. Whereas the 3200 meter runners would normally run the night before or at least early morning before the 1600, they will have a scant four hours between those two races this year.

Those that are attempting the Distance Triple - 800, 1600 and 3200 - will have about three hours before taking on the 800. Manhattan's Daniel Harkin, Olathe North's Anjali Hocker Singh and St. Thomas Aquinas' Logan Seger are three of those who qualified in all three of those events.

The sprinters will be busy, too. Prelims for the 100 and 200 meters, and the shorter hurdling events begin at 11:56 a.m., then finals in the hurdles and 100 meters beginning at 2:30. Shawnee Heights sophomore Jeremiah Smith has a great chance to win all three of those events in class 5A, but he'll have to maneuver his way through three preliminary races and the first two finals within a stretch of less than three hours.

For track and field fans, what a blessing. Forget for a moment that we are just thrilled to have the state championships back this year - we certainly are - and think about how action-packed the afternoon schedule will be.

So, let's take a look at some of the storylines in this year's 5A/6A state track and field championships:

Manhattan has been the favorite from the beginning of the season. They positioned themselves well at regionals, qualifying individuals in 15 of 18 events. They have class 6A's top-ranked performers in the 3200 meter run (Daniel Harkin), shot put (Darius O'Connell), javelin (Jason Moran) and long jump (Charles Jones), and top three performers in three other events.

But don't hand Manhattan the big gold trophy yet. Gardner-Edgerton and Blue Valley are pretty loaded, as well, including strength in the sprints and relays - where Manhattan is a little light this year.

Manhattan will build a big lead in the field events, then try to hold off the other two teams with a solid band of distance and middle distance runners. The smart money here says that Manhattan survives the test. Pick: Manhattan

Olathe North freshman Anjali Hocker Singh toiled in anonymity for much of the 2020 cross country season before breaking out to win regionals. Since then, she's been nearly unbeatable in Kansas, winning the state cross country title and now ranked No. 1 in the 800, 1600 and 3200.

Olathe West seems to be the only team capable of catching Olathe North. Olathe West has a stable of sprinters, including top-ranked Kennedi Cline (200 and 400) and its 4 X 100, 4 X 400 and 4 X 800 relay squads. Shawnee Mission Northwest could climb its way into the title picture - Ella Mackiewicz and Olivia Pixton are ranked No. 1 in the high jump and 300 hurdles, respectively - but more likely is the team with the inside track to the third place trophy.

Olathe North has been No. 1 all season. They also come out tops in a virtual meet based solely on regional marks. Pick: Olathe North

Mill Valley and St. Thomas Aquinas seem to be the power-brokers in this division. They are a study in contrasts.

Mill Valley's strength is in the field events and sprints, including class 5A's top-ranked pole vaulter (Garrett Beashore) and 400 meter runner (Nen Matlock). St. Thomas Aquinas is a distance running powerhouse: Logan Seger and Tommy Hazen are 1-2 in the 1600 and 3200, leading a crew that could score between 40-50 points at the state meet.

Based on season-best marks, those two teams are in a dead heat for the class 5A title. But based on regional marks, Andover slides into the team title picture with top-ranked 800 meter runner Samuel McDavitt, relays that all fall within the top five and four sprinters that should climb the medal stand.

But Mill Valley seems to have the greater depth, which will offset Aquinas' distance dominance. Pick: Mill Valley

This is a different type of St. Thomas Aquinas girls team. In the past, the Saints won the class 5A state crown with a tsunami of distance runners. This year's team enters as the favorite based on No. 1 rankings by Paris Bond (triple jump and pole vault), Grace Allen (long jump) and Caroline Bien (high jump). Oddly, Aquinas is unlikely score any points in the 1600 or 3200, though 800 meter runner Alexis Huddin had the division's top time out of regionals (2:22.07).

Leavenworth dominates in the sprints, where they're not going to get any resistance from Aquinas. Senior Wynter Ramos is No. 1 in the 200, junior Dhakiya Blake is No. 1 in the 400 and both key strong relays.

But Mill Valley, Kapaun Mt. Carmel and Maize South came out of regionals looking a bit stronger heading into this week's state meet. Each of those teams spread their strength in the field and track, and each has at least one athlete that is ranked No. 1 in their respective events.

This will be exciting to watch on Thursday afternoon. St. Thomas Aquinas will have a big lead after the field events are done, then will bite its nails as it watches the other contenders try to chase them down. This is probably the biggest toss-up in Thursday's team races. Pick: St. Thomas Aquinas

When these two matched up in late April, Harkin opened an early five second lead and won in 9:11.31, his season best, while Blomker stayed about five seconds behind. Blomker has since run 9:15.32. Harkin is the two-time state cross country champion and Kansas Gatorade Runner of the Year. Blomker is a freshman who finished as the class 4A state cross country runner-up for Bishop Miege last fall, and has run the second fastest 1600 meters in the United States this season for a freshman (4:16.01).

These two know each other well, McGinnis winning the Sunflower League title and Cline winning the regional title. Cline also beat McGinnis at the Shawnee Mission North relays. McGinnis is No. 1 in Kansas in the 100 meters; her 11.72 at regionals last week is eight-hundredths faster than the all-class state record of 11.80 (Tisa Johnson, Great Bend, 1983). Cline is No. 1 in Kansas in the 200, with a season best of 24.84.

Who wouldn't want to see a high schooler jumping 25 feet? Benson went to No. 3 in the United States when he flew 25-2.25 at the regional meet last Thursday. If he can do it again, he'd eclipse the oldest standing all-class state record in Kansas: 24-11.75 by Wichita South's Veryl Crawford in 1974.

A close second here is Benson's matchup with Shawnee Heights' Jeremiah Smith in the 100 meter run. Smith has run a season best of 10.37 for 100 meters and Benson is at 10.44; the state record is 10.36 by Wichita Southeast's Mario Ponds.

Blake burst onto the scene as a freshman and won the class 5A state title in the event. She is No. 1 in Kansas this season (56.75) and was undefeated until Rottinghaus out-dueled her at the regional meet on Thursday. They are 1-1 against each other this season - Blake won the league title, and Rottinghaus won at regionals. The rubber match will be at this week's state meet.