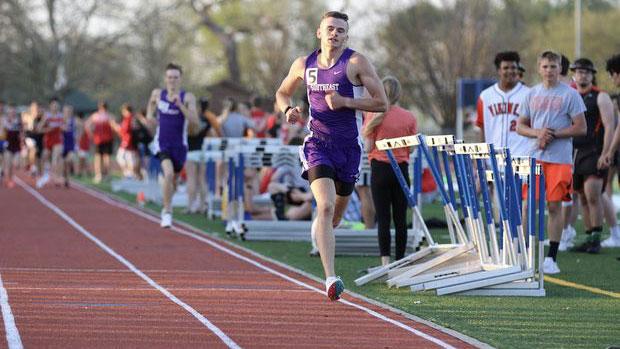 Southeast of Saline's Dylan Sprecker clocked 4:17.65 this week to move within 1.5 seconds of the class 3A state record for 1600 meters.

We've said it already, but let's do it again: Ah, it's great to have Kansas high school track and field back this year.

Near perfect weather conditions greeted the first full weekend of postseason competition across the Sunflower State. And it showed. There were several performances this past week that not only brought league titles, but either beat or challenged state records in that event.

Start with the Eastern Kansas League where St. Thomas Aquinas' Tommy Hazen ran the fastest 3200 meter time in a Kansas high school meet since 2012 when he clocked 9:07.89. He took over the state's best time this season from teammate Logan Seger, who ran 9:10.85 in late April.

Both of those guys have run faster than the class 5A state record held by Dwight Davis - also of Aquinas - who won the state title in 1996 with a time of 9:14.78. And they are just a few steps behind the all-class state record of 9:06.64 run by Shawnee Mission West's Jonah Heng in 2012.

Let's jump from the longest event on the track, to the shortest: Hays junior Jaren Kanak won the Western Athletic Conference title when he clocked 10.37 for the 100 meter dash. It's the second fastest time in Kansas this year, and just one-hundredth of a second off the all-class state record of 10.36 run by Wichita Southeast's Mario Ponds in 1996.

Even more, it puts Kanak smack dab into the center of the loaded class 5A state title picture. Shawnee Heights sophomore Jeremiah Smith currently has that division's top time of 10.36 (it's also No. 1 in Kansas), while Lansing's superstar senior Malik Benson has run 10.44. Smith, however, is reportedly nursing a hamstring injury; he did not run in the United Kansas Conference meet this past weekend.

Benson is undefeated in the 100 meters this season, winning a head-to-head matchup with Smith earlier this season. He's also No. 1 ranked and unbeaten in the 200 and long jump. He won all three of those events at the United Kansas Conference meet this past weekend, running his combined season record to 16-0.

Katelyn Fairchild of Andale had a big day on Friday. She won the Ark Valley Chisholm Trail League title in the javelin with a career best throw of 173-6 - putting her at No. 2 in the United States this season. It's also nearly five feet better than the all-class state record in the event, 168-8 by Olathe North's Dana Baker in 2018.

Another dominant thrower - Riley County senior Ames Burton - put up a career best of 153-10 to win the discus title at the Mid East League meet. That mark puts her at No. 25 in the United States currently. Burton is just a few feet short of the class 3A state record, 157-7 by Northern Heights' Jacquelyn Leffler in 2008.

Olpe senior Max Blaufuss launched the javelin 208-7 to win the Lyon County League title. That's a career best of nearly 10 feet for Blaufuss, and more than six feet better than the state record in class 1A.

Blaufuss is No. 1 in Kansas and No. 4 in the United States currently.

There were some fireworks in the Sunflower League this week, especially in the relays. Lawrence Free State's boys 4 X 800 relay put up the state's best time this season when they won the league title in 7:55.56 - just the second Kansas school under 8:00 this season.

As impressive as that time is, it's still eight seconds short of the class 6A and all-class record of 7:47.85 by Wichita Heights - state track and field fans will remember the Everett Brothers - set in 2005.

Olathe Northwest's boys also lit up the relays at the Sunflower League, clocking 3:24.67 to grab the state's top time in the 4 X 400.

One of the best relays races this week took place in the United Kansas Conference, where two very good speed programs went head-to-head. Lansing clocked 48.49 - the fastest time in Kansas this season - to edge Leavenworth, which finished in 49.59 but has the state's second-best time of 48.76.

Those two schools will see each other plenty over the next couple weeks - likely again at regionals and the state finals.

The best photo finish of the week: Kendra Wait of Gardner-Edgerton got the win over Olathe North's Ka'Liyah McGinnis in the finals of the 100 meter dash at the Sunflower League championships. Both were timed in 12.13. Kennedi Cline of Olathe West was just a hair behind at 12.36.

A close second for the best photo finish took place in the 300 meter hurdles at the Ark Valley-Chisholm Trail League Div. II meet. Brock Merz of Arkansas City clocked 39.60 to edge Max Middleton of Andover (39.62). Those are also the No. 2 and No. 3 fastest times in Kansas this season.

Both boys and girls tops times in Kansas went down in the 400 meters this week: Dhakiya Blake of Leavenworth lowered her own mark when she won the United Kansas Conference in 56.75, and Wichita Heights senior Elijah Mosley won the Wichita City League meet in 48.16. Mosley's combined record in the 100, 200, 400 and 800 this season is a perfect 15-0.

Annalisa Cullens of Wellington, a sophomore, ran the fastest 300 meter hurdles in Kansas this season when she won the Ark Valley Chisholm Trail League Div. IV title in 45.03.

This year's state track and field meet is still 12 days away, but one Manhattan athlete has already won an individual championship.

Manhattan senior Daniel Harkin -- the two-time class 6A cross country champion and two-time Kansas Gatorade Runner of the Year -- won the class 6A state championship in singles tennis on Saturday. The win came on the heels of finishing fourth as a freshman and third as a sophomore; last year's tournament was cancelled due to the COVID-19 pandemic.

The Manhattan Mercury reported that Harkin spent the early part of last Thursday honing his tennis stroke, then ran the 1600 meters at the Centennial League championships in Topeka, which he won in a time of 4:22.63. Then, he and his family hopped in the car and drove up to Kansas City for the two-day tennis championships.

Harkin has won two cross country titles and the class 6A 3200 meter title in 2019. His win on Saturday completed a pretty rare feat -- an individual state championship in three different sports.

By the way, he's got the No. 1 time in class 6A for the 3200 meters entering this year's regional and state meets, and is No. 5 in the 1600. After spending all of this season so far juggling two sports, he'll have the next two weeks to rest and concentrate on just one.

Finally this week, if you're a betting person, you might want to call up Sterling's Tyus Wilson.

The senior won the high jump at the Ellinwood Invitational with a leap of 7-0, the seventh time this season he has cleared seven feet, and his seventh win of the season.

Maybe a good time to head to a casino, eh?
Tweets by KansasMileSplit