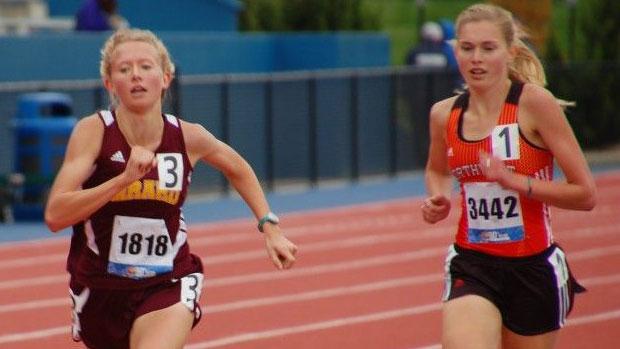 We interrupt this weekly focus on Kansas high school track and field to bring you an update on a showcase college event coming to our state this week.

Tickets for the Big XII outdoor track and field championships go on sale Monday and can be purchased online at www.kstatesports.com/feature/2021Big12Outdoor. The annual event -- COVID not withstanding - takes place Friday through Sunday at Kansas State University's R.V. Christian track, which has previously hosted the 2005 and 2012 Big XII championships.

In 2018, K-State renovated the R.V. Christian track and let me tell you...the place looks amazing! The purple track is adorned with new lighting, the signature Olympic rings landscaped on the south side, locker rooms on the north end and room to seat more than 3,000 spectators.

Everything you need to know about this year's championships is available online at https://www.kstatesports.com/feature/2021Big12Outdoor

For fans of Kansas high school track and field, you'll have a chance to relive a few memories. One of the best rivalries in recent memory took place in 2016- 2017 between distance runners Cailie Logue and Molly Born.

Logue (then at Girard High School) and Born (Shawnee Mission Northwest) battled it out a few times during the cross country and track and field seasons, but one of the best was in the 3200 meter run at the Kansas Relays in April, 2017.

Born, then a junior and two-time class 6A champion at 3200 meters, set a blistering opening pace, charging out to a 5:08 opening mile. Logue and Lawrence Free State's Emily Venters gave chase, about two seconds behind.

At the time, those times ranked as the fifth, sixth and eighth fastest in the United States.

Logue, now at Iowa State, has since become the dominant female runner in the Big XII, having won three conference cross country championships and four more on the track. Born, who runs for Oklahoma State, has never won a Big XII title, but has three top 3 finishes in the conference meet.

Both earned NCAA Division I All America honors at the 2019 national cross country championships.

The two former Kansas high school stars may square off this Friday in the Big XII 10,000 meter run (8:15 p.m.). They hold the top two times in the conference this season: 33:09.99 for Logue and 33:10.77 for Born - ironically from the same race in early April (the Hayward Field Premier in Eugene, Oregon).

Earlier this week, I had a chance to catch up with Born - attempts to talk with Logue were unsuccessful. But I think Born sums up pretty well how these two distance stars feel about each other.

"I look up to Cailie as a great runner and all-around person and I am always excited for the opportunity to race with her," Born said. "I feel like we continue to bring out the best in each other like we did in high school. I think we both have great potential for success in the 10K this outdoor season, and I can't wait for the rest of the season."

Born, who said her parents, brother and grandparents are expected to be on hand to watch her run next weekend, added she always looks forward to racing in her home state. "Being close to home is always special and I love that family and friends can make it out to watch," she said. "This will be my first Big 12 outdoor championship and will definitely be one to remember."

The Kansas State and University of Kansas rosters are dotted with former Kansas high school track and field stars, as might be expected.

Back to the high school scene

In any given year, you can expect the Shawnee Mission North Relays to showcase some of the best talent in Kansas. Put that together with incredible track and field weather this past weekend and you have...well, you have what happened this week.

The annual meet saw 10 state-best marks set - five in the girls' meet and five on the boys' side.

Riley Vandaveer of Olathe South ran the fastest 1600 run in Kansas in last four years when he clocked 4:12.98 (No. 46 in the country right now). In that same race, Shawnee Mission North freshman Micah Blomker was the runner-up in 4:16.01, which puts him at No. 1 in the United States among high school freshmen. Blomker also is No. 2 among U.S. freshman in the 3200, having run 9:15.32 the week before.

In the field events, Brett Schwartz of Santa Fe Trail won the discus with a state-best 190-6 - more than 15 feet better than his previous best and a mark that moves him to No. 6 in the United States.

There were only two other state-best marks this pasts weekend:

* Chesney Peterson of Stanton County, a sophomore who was undefeated in winning the state cross country title last fall, and is 11-1 in races this track and field season, clocked the fastest time in the girls 800, 2:15.90 to win the Lakin Invitational.

* Annalisa Cullens of Wellington, also a sophomore, won the 100 hurdles at the Circle Invitational in a time of 14.82. It's the third time she has run under 15 seconds in the event this season; she's five-hundredths of a second faster than Blue Valley Southwest's Lauren Heck (14.87).

She'll be one to watch in the years to come.