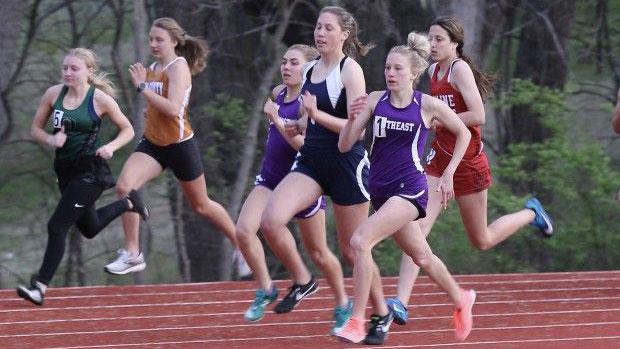 Here comes the Grumpy Old Man in me...

This was supposed to be one of the greatest weekends in the Kansas track and field season - short of the state meet. This was the weekend when the Kansas Relays, one of the most historic meets in the United States, was held in the Sunflower State.

At times in history, the Kansas Relays were held in equal esteem to such noted events as the Penn Relays, Texas Relays, Drake Relays and a few others. The Kansas Relays have lost some of their luster in, perhaps, the past decade, but it was still a remarkable event for high school athletes. It was as close as we'd get to having all of the biggest stars in Kansas and surrounding states - regardless of classification - on the track and in the field to compete against one another.

Not in separate classifications. Head-to-head. Mano-a-Mano.

It was understandable that last year's event was cancelled due to the COVID-19 pandemic. It is not at all acceptable for this to be happening again this year. And, there are rumblings that next fall's Rim Rock Classic - one of the greatest high school cross country events in the Midwest - will also be axed...again.

It's sad that the upper athletic administration at the University of Kansas has apparently minimized its success as a track and field and cross country school. It's sad that schools with less resources - high schools, small colleges and universities - are being creative in this time of COVID and forging ahead with opportunities for youth to excel.

My hope is that a new athletic administration will once again recognize and embrace its historic excellence in cross country and track and field and bring back these events to our state.

Let's get on to something more positive, like Manhattan senior Darius O'Connell's throw of 60-4 in the shot put to win the Manhattan Invitational on Thursday. O'Connell, a senior who won the class 6A state title as a sophomore, moved to No. 13 in the United States with that throw; he is also nearly six feet better than anyone else in Kansas this season.

Speaking of national rankings, Sterling senior Tyus Wilson increased his season best to 7-0.75 this week in winning the Wichita State Pre-State Challenge. He's at No. 3 nationally, just an inch behind the national leader.

Devin Loudermilk, a senior at West Elk, also cracked the top 10 nationally, clearing 6-10.5 to win the Eureka Invitational on Tuesday. Loudermilk was the class 2A state runner-up to Wilson in 2019, when he cleared 6-8. His jump this past week is a personal best and puts him at No. 8 nationally.

Those two guys - the best in Kansas so far this season - will have a remarkable dual at this year's class 2A state championships.

Also in Manhattan, Lansing's Malik Benson, a senior, grabbed the No. 2 spot in the United States when he soared 24-8.5 in the long jump. It's his best jump ever by nearly a foot, and nearly a foot and a half further than anybody else in Kansas this season.

The Pre-State Challenge at Wichita State was the premier meet in the state this week. With the absence of the Kansas Relays - don't get me started again! - it seems to be drawing more athletes from across the state than in past years.

One of the best is Shawnee Heights sophomore Jeremiah Smith, who won the 100 meter dash in another fast time - 10.59 - and the 110 hurdles in 15.17, which is also the best time in Kansas this week.

But the ladies upstaged the guys at the Pre-State Challenge. Junior Brooke Hammond of Garden Plain won a close race in the 100 meters, clocking 12.33 to edge Sydney Rich of Maize South (12.40), Serenity Jackson of Wichita South (12.45) and Lillian Harris of Kapaun Mt. Carmel (12.48).

Earlier in the week, Hammond clocked 25.74 for 200 meters to win the Belle Plain Invitational. Rich rebounded to win the 200 at the Pre-State Challenge, clocking 25.77.

Kinley Brown of Piper had the fastest time in the 100 among Kansas girls this week, clocking 12.30 to win the Tonganoxie Invitational. She also won the 200 in 26.20.

Wichita Heights senior Elijah Mosley is still the only Kansas boy to crack 50 seconds in the 400 meters. He did it for the second time this season, winning the Pre-State Challenge in 49.94, which is just off his own state-leading 49.32.

Among distance runners, Chesney Peterson of Stanton County clocked the fastest times among Kansas girls in two events: the 800 (2:17.47) and 1600 (5:02.03). Peterson, the class 2A state champion in cross country last fall, won both of those events at the Pre-State Challenge, out-running several runners from much larger schools.

Peterson, just a sophomore, was a perfect 9-0 during the cross country season, and so far is 6-0 during the young track and field season. She has run career bests in every race so far this spring.

Olathe East senior Myles Benefield, the state leader in the 300 hurdles with a time of 39.93, nearly cracked the 40 second barrier again this week. He won the Olathe-Blue Valley Challenge in 40.33, which is also better than all other Kansas hurdlers this season.

Two of the best girls' throwers in Kansas matched up at the Pre-State Challenge. Ames Burton of Riley County, a senior who placed second in the class 3A discus two years ago, out-dueled Katelyn Fairchild of Andale, who many consider the best all-around thrower in Kansas. Burton won with a throw of 132-8.25 while Fairchild was second at 129-0.

Fairchild, however, had a whopping throw of 171-7.5 to win the javelin. That mark is No. 3 in the United States this season.

Senior teammate Samantha Marx topped Fairchild in the hammer throw (which is not a sanctioned event for the Kansas state championships) with a throw of 152-9. Fairchild was second at 133-6.

Ty McPhail of Andale, a senior whose win in the pole vault at the 2019 class 4A state championships also clinched the team championship, set a new career best of 16-2 to win that event at the Pre-State Challenge. The mark also puts McPhail at No. 13 in the United States.

Here's the full list of Kansas girls who took over the No. 1 spot in Kansas this week:

And new leaders this week in Kansas boys: