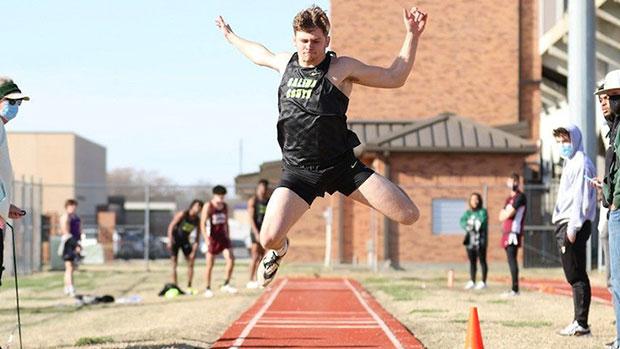 Brandt Cox of Salina South placed second in the long jump at the Saline County Invitational.

Happy Easter everyone! What a beautiful weekend in Kansas, and a beautiful start to the 2021 season. If you're like me, you are just simply pumped up that we have a season this year.

Let's jump right into some of the great performances we've seen already this season, starting with a 2019 state champion who has already crushed his career best in his first two meets of the season.

Manhattan's Darius O'Connell, now a senior, is the top shot put thrower in the state right now, launching the shot 59-0 to win the Junction City Invitational on Thursday. That's about six feet more than he threw to win the class 6A title two years ago, and about five feet more than his previous career best.

Sprint speed? There's plenty of that going on, too. Shawnee Heights' Jeremiah Smith - a sophomore competing in his first high school season -- has the state's best time in the 100 meters at 10.58, winning the Free State Early Bird Invitational on March 25. About a half hour later, he posted the state's top time in the 110 meter hurdles, winning in 14.59. And later in the meet: 3-for-3 after he also won the 200 meters (22.56).

Five Kansas boys have thus far broken the 11 second barrier in the 100 meters.

Leavenworth junior Dhakiya Blake, the class 6A state champion at 400 meters in 2019, is back at it. She's posted the fastest quarter mile among Kansas girls, clocking 58.40 to win her home invitational on Thursday.

The best boys' 400 meter runner so far this year was also the best two years ago. Elijah Mosley of Wichita Heights, who won a class 5A state title in 2019 (48.29), is the only Kansas boy under 50 seconds so far this season. He finished in 49.32 to win the Wichita Southeast Invitational this week.

There was a pretty darn good girls distance race at the Blue Valley Northwest Spring Classic on Friday. Senior Riley Beach won her team's home meet in a state-best time of 10:53.58 - an excellent time this early in the season - and beat last fall's class 6A cross country champion, freshman Anjali Hocker singh of Olathe North (11:06.46).

Beach was the cross country runner-up to Hocker singh last fall, and also the 2017 class 6A cross country champion. A week earlier, she also posted the top girls 800 meter time of the young season, 2:20.74 at the Blue Valley West Triangular.

Lawrence Free State's boys, the class 6A state cross country champs last fall, are flexing their distance strength again. Jack Keathley-Helms clocked 1:58.12 to edge teammate Ben Shryock (1:59.81) at the Free State Early Bird Invitational. Those are the No. 1 and No. 3 times in Kansas so far. Shryock is also No. 2 in the 3200 meter run at 9:43.98.

Logan Seger of St. Thomas Aquinas clocked a career best of 4:20.28 for 1600 meters to win the Olathe North Preseason Classic. That's the best time in Kansas so far. Teammate Tommy Hazen sits at No. 4 with a time of 4:27.97.

Five Kansas girls have already cleared 5-4 in the high jump, all winning meets over the past two weekends. They include Lindsey Dewitt of Blue Valley West, Reese Hulcher of Lawrence Free State, Tess Roman of Shawnee Mission East, Asha Regier of Newton and Rayne Erickson of Decatur Community.

How about Belle Peters of Smoky Valley? One of the state's best all-around athletes, Peters has the top jump in the pole vault (12-0), and kicked off her season on Thursday at the Republic County Buff Invitational with wins in the long jump (16-7), 100 meter hurdles (17.64) and 200 meters (28.05). Peters is already committed to compete for Pittsburg State University next year.

Here's a contender for closest finish of the week: Megan Boeding of Kapaun Mt. Carmel clocked 15.91 for the 100 meter hurdles to edge Kennadie Jinkins of Wichita East (15.98) at the Wichita Southeast Invitational.

Otto Knittel of Spring Hill swept the hurdle races at the Baldwin Invitational Thursday, winning in 14.59 over the 110 meter hurdles, and 41.54 in the 300 meter hurdles.

Also this week, Evan Schmidt of Blue Valley West cleared 14-1 to post the top mark in the boys' pole vault. And at the Cimarron Invitational, a good head-to-head battle took place between Dighton sophomore Max Neeley and South Gray junior Brady Deges. Neeley eventually cleared 14-0 to win the meet, while Deges settled for second at 13-6 - the No. 2 and No. 4 marks in Kansas so far this season.

As we all know, we missed an entire track season last year due to the COVID-19 pandemic. So, we have two new classes of athletes - freshmen and sophomores - to the Kansas scene this season.

Who are some of the young lions making a splash so far? In addition to Smith, McGinnis Hocker singh and other underlcassmen mentioned above, here is a list of some of those who are making a splash in their first high school season:

* Lillian Harris, Kapaun Mt. Carmel - The speedy sophomore clocked 12.77 to finish third in the 100 and 26.41 for second at the Wichita Southeast Invitational this week.

* Nen Matlock, Mill Valley - The sophomore won the 800 meters at the Leavenworth Invitational in 2:00.84, landing him at No. 4 in Kansas right now.

* Jayme Hagerman, Larned - Also a freshman, her jump of 37-11 to win the LaCross Invitational is also the best jump in Kansas so far this season.

* Michael Murray, Southeast of Saline - A sophomore, he won the Saline County Invitational with a jump of 21-4, the fifth best mark in Kansas this season.

* Adrienne Locke-Garcia, Olathe Northwest - A sophomore, she won the Blue Valley Northwest Spring Classic with a throw of 37-6 in the shot put. That's the second furthest throw in Kansas this year.

* Grady Seyfert, Beloit - A sophomore, he won the shot put at the Republic County Buff Invitational with a throw of 48-0 (just outside the state's top 5), and was second in the discus at 131-3.

And another addition to my Mt. Rushmore...

My family and I landed in Kansas in 1998 and shortly after that we witnessed one of the truly dominating girls' distance runners in the state's history. Between 2000 and 2004, Trisa Nickoley of Shawnee Heights High School won 17 state championships - four each in cross country, the 400, 800 and 1600, as well as a 4 X 400 meter relay title.

Her dominating career included a high school best of 2:06.67 at the Kansas Relays, which still stands as the fastest time by a high school runner in Kansas. As a freshman at the University of Missouri, she won the Big 12 indoor title in the 800 meters, on the way to becoming a 14-time All Big 12 honoree and four time league champion.

Her career includes NCAA Division I All American honors, and she ran in the 2008 U.S. Olympic Trials.

Last week, I named four runners - all great ones in their own right - as my "Mt. Rushmore" of Kansas girls distance runners. I should have included Nickoley, as well. Our Mt. Rushmore will now have five runners.