First in a series.  The dictionary defines "archetype" as "a perfect example or model of something." The Kansas state motto is "Ad astra per aspera," which means "to the stars through difficulties." This series will focus on native Kansan track and cross-country athletes who are archetypes of that state motto, people and athletes who overcame remarkable difficulties to achieve amazing things. Some will be famous, others not so much, but they will all embody the traits that allowed them to reach the stars through difficulties. 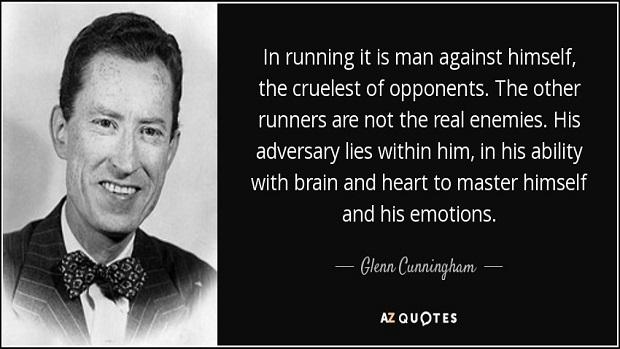 There is no one better to kick off this series than Glenn Cunningham. Wait, check that. Better make that Dr. Glenn Cunningham, Ph.D. Only three American men have held the world record for the mile and all three came from Kansas, with Glenn Cunningham being the first. But I'm getting ahead of myself. Let's back up to the beginning, because it is the beginning that makes Cunningham's true life story read like a script that even Netflix would reject as being too incredible to be believable.

Glenn Cunningham was born in tiny Atlanta, Kansas (current population: 195), located in Cowley County, southwest of Wichita, in 1909 (yeah, I know that was a long time ago, but trust me, this is a really cool story). He attended a one-room schoolhouse heated with a wood burning stove. During the winter, students would take turns arriving at school early to light a fire in the stove and warm the school before everyone else arrived. A small can of kerosene was used to help light the fire more quickly.

One day when Cunningham was only eight years old, it was he and his 13-year-old brother Floyd's turn to light the fire. Tragically, someone had mistakenly filled the kerosene can with gasoline. A massive explosion occurred, killing Floyd and burning Glenn severely, especially his legs.  He lost all the flesh on his knees and shins, all the toes on his left foot, and the arch of his foot was practically destroyed. His right leg was so misshapen that it was now two inches shorter than his left leg.

His legs were so badly burned that the doctors believed the only way to save Cunningham's life was to amputate his legs. Cunningham was so distressed at the death of his beloved brother and the thought of his legs being amputated that his parents, against all medical advice, would not allow it. The doctors sternly predicted that even if he somehow lived (which was unlikely without the amputation) he would probably never walk again.

For the next two years, he was bedridden and his mother would massage his legs daily. When he wasn't in bed, he was confined to a wheelchair, with his burned legs dangling uselessly.

One day in the early summer of 1919, two years after the fire and when he was 10 years old, Cunningham's mother put him in the wheelchair, pushed him out into the yard to get some fresh air, and then went back inside. Cunningham's mother looked out the kitchen window a few minutes later and was shocked to see him lying face down in the grass, dragging himself with only his arms.

Cunningham had thrown himself from his wheelchair and, using only his arms, dragged himself and his useless legs over to the picket fence that surrounded their yard. Again using only his arms and against his mother's vehement protests, he pulled himself upright and, through sheer force of will, tried to make his legs work whether they wanted to or not. Cunningham began dragging himself along the picket fence trying to force his legs to function but to no avail.

He continued this routine for months, throwing himself from his wheelchair, crawling to the fence and then dragging himself around the yard, quickly wearing a smooth path in the yard.

Then, slowly and to the utter astonishment of his doctors, Cunningham's legs began to function a little again.

At first, he could only stand.

Finally, the halting steps turned in to actual walking.

But after being able to walk again, Cunningham discovered something that would eventually propel him to the highest levels of the sport despite his horrific injuries: his legs hurt less when he ran than they did when he walked.

"It hurt like thunder to walk, but it didn't hurt at all when I ran. So for five or six years, about all I did was run," said Cunningham years later.

By the time he was 12, Cunningham's family had relocated to Elkhart, Kansas, and he could now outrun everyone in his age group, but he was only getting started. His senior year in high school, the boy who was once told he should have his legs amputated and who willed himself to walk again by dragging himself around the picket fence in his yard, broke the world high school record for the mile, running 4:24.7 as a high school senior.

Pause and let that sink in for a moment.

Do you realize what that means?

It means that nearly a century ago, after being burned to the point that his doctors didn't think he would live and recommended amputating his legs, Glenn Cunningham ran a time - on a cinder track, wearing old leather spikes and without benefit of modern training methods - that was the high school world record at the time and still would have ranked him 7th in the state of Kansas, all classes, in 2017 (after conversion to a 1600 time).

But Cunningham was far from finished.

He continued on to run track at the University of Kansas. He won the NCAA 1500 in 1932 and was named to his first U.S. Olympic team (yes, his first - there would be more, so keep reading) for the 1932 Los Angeles Olympics. In the Olympic 1500 meter final, Cunningham placed fourth, missing a medal and a podium spot by only a few meters.

After the Olympics, he continued his education and athletic career at KU and broke the NCAA mile record by running 4:11. Cunningham graduated from KU in only three years and with the highest academic marks in his class. He again won the NCAA mile as a senior, this time running 4:09.8. He would also win the 1933 AAU 800 in 1:51.8.

On the boat taking the U.S. Olympic team to Berlin, Cunningham was voted "Most Popular Olympic Athlete" by his teammates. The second-place vote getter?

That was none other than Jesse Owens, the legendary African-American sprinter who would humiliate Adolf Hitler's "superior race" in Berlin.  Owens also just happened to be Cunningham's roommate throughout the trip and during their stay at the Olympic Village during the Berlin Games. The two formed a close bond and became life-long friends.

At the 1936 Berlin Olympics, with Nazi dictator Adolf Hitler watching from the stands, Glenn Cunningham - from Elkhart, Kansas and horribly burned as a child - became the Olympic silver medalist, finishing second to New Zealand's Jack Lovelock. Both Lovelock and Cunningham ran under the old world record in the process.

As unbelievable as Cunningham's athletic life story is, it is his contributions after his athletic retirement that may have meant the most to the world.

Cunningham graduated from the University of Iowa in 1936 with a Masters degree in physical education. Just two years later, he would add a Ph.D. from New York University in 1938. During World War II he entered the Navy and established new physical training programs at both the Great Lakes and San Diego naval training stations.

In 1947, Cunningham and his wife opened the Glenn Cunningham Youth Ranch on an 840 acre tract of land near Cedar Point, Kansas where they helped nearly 10,000 underprivileged children during his lifetime.

Ad astra per aspera indeed. There is no finer example of our state motto and no better archetype for perseverance than the life lived by Dr. Glenn Cunningham, Ph.D.