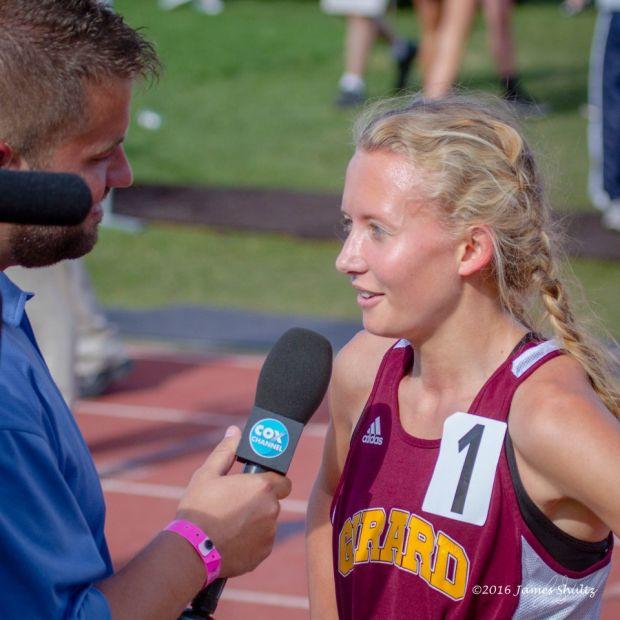 Cailie Logue is a strong favorite to become just the fifth Kansas girl ever to win four individual state championships, and she would become the first ever in Class 4A. Logue is among the nation's best prep girls, having recently placed third at the Nike Cross Nationals in 2015, and winning the Festival of Miles in 2016.

Kansas MileSplit: You've had quite a summer, starting with winning the Festival of Miles in St. Louis and later running at the Nike high school invitational race during the U.S. Olympic Trials in Eugene, Ore. What's it been like for you and how have you managed the busy schedule?

Cailie Logue: The Festival of Miles is always a competitive summer race for me because it occurs about a week after the state meet. It has a great atmosphere and takes place in the evening, so the weather is nice and cool. Not to mention, there is never a lack of fast competition. All of these factors usually make this race a unique opportunity for a fast time or a PR.

Because the Olympic Trial Exhibition Mile took place during a camp in the end of June, I decided it would not be in my best interest to try and stay sharp for such a long period of time, and I did not want the race to affect my cross country training.

After the Festival of Miles, I took a two week break, and began base training for cross country. I approached the race as a unique opportunity to run at Hayward Field (at the University of Oregon) and spent the week enjoying my time at camp, continuing to train for cross country, and learning from the runners there.

With such a busy summer, have you had time to relax, maybe even get away from training for a while? If so, what have you been doing?

I have spent most of my summer traveling. Unofficial college visits have taken me to Oklahoma, Iowa, Colorado, Minnesota, and Arkansas.

My family and I also vacationed in Minnesota and stayed in a cabin on Lake Superior where we canoed and hiked. Also, a friend and I qualified to compete in a STAR event at FCCLA Nationals in San Diego where we got to go surfing, which was quite a work out!

Some of my teammates and I also attended the Adams State High Altitude Distance Camp in Alamosa, Colorado.

A portion of my summer has been spent researching college programs, meeting coaches, and visiting campuses to begin the process of deciding what university I am going to attend next fall. I also spent time hanging out with my friends, teaching second and third graders at Vacation Bible School, and getting my rabbits and goats ready for the Crawford County Fair.

This Fall, you could become just the fifth Kansas runner to win four state championships in cross country. Can you describe your feelings toward approaching this accomplishment? How important is achieving that to you?

My main priority is always to improve from year to year. If I was to improve this cross country season, and still not win the state meet, I would be just as happy as if I were to win. To me, the most important thing is that I continue to improve. My fastest races are never an easy win. I run my fastest times by racing other fast competitors. I can honestly say many of the races I am most proud of I did not win, but I ran faster and saw obvious progress.

What colleges are you considering currently and when do you hope to make a decision?

I am currently considering many colleges in the Midwest including Oklahoma State, Iowa State, Tulsa, Adams State, Pittsburg State, KU, the University of Minnesota, and the University of Arkansas.  I would like to make a decision when I am sure of where I want to go.  I do not want my official visits to make me tired and affect how I race during cross country, so I want to take my time to make an informed decision.

Finally, your Dad is your coach and the two of you seem to have a great relationship. What's it like having him as a coach and a Dad, and how do you separate the two?

For us, it is not necessarily important that we separate the title of coach and dad; the two, to me, are actually very similar. My dad was also coached by his father Errol Logue, and has perspective on having a dad as a coach. Matt Logue, whether being a dad or a coach, is an advocate for his athletes and children. He is always helping me do what is necessary to succeed and become a better person in running and in life in general. Many of my friends and teammates on the cross country team have jokingly also taken to calling Coach Logue, "Dad."