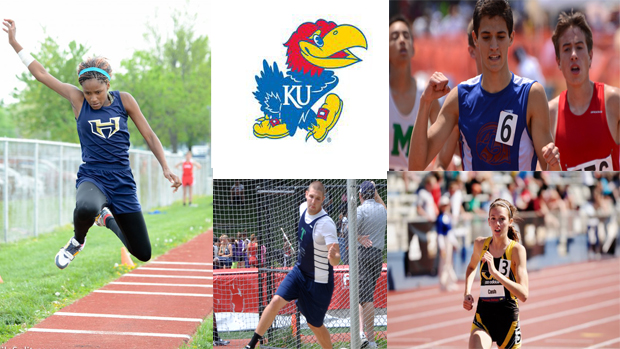 Early Instinct: Event of the Weekend

The shot put will be the event of the weekend.  The top two entrants are the top two throwers in the nation. Kord Feguson of Ottawa holds the best mark in the nation, throwing the shot an unrealistic 63-5.75 at the Mill Valley Invitational. He will face Oklahoma’s Bo Farrow who has thrown over 60 feet twice this year including his 62-5.5 PR set on Kansas soil this past weekend at the PSU Gorilla Relays. In the Discus both Farrow and Ferguson will be in the mix, as well as Missouri’s Josh McDonald and Khalil Davis and the Discus field might be as good as the shot put field.  After McDonald threw 192-3 last year there was talk about having to move the awards tent further away from the Discus ring.  The State champ is already off to a great senior season as he threw a personal best of 192-6 (US#3) in his second meet of the season.  Davis, who has thrown 180-9, is the top sophomore in the nation. 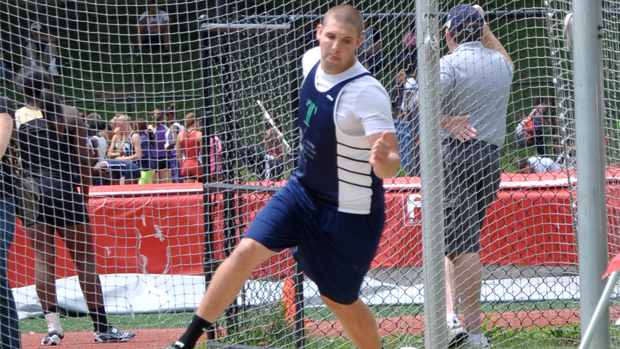 Last year’s girls’ race was incredible with three girls going under 4:54.  All three will be back including sub 4:40 miler, Alli Cash. Cash, a future Oregon Duck, will be making her season debut after getting dinged up at the end of fall. She will be facing arguably the two best sophomores in Rebekah Topham and Hannah Long. Topham is in the middle of her best track season yet – blocking in at 4:48.66 to place fourth at the Brooks PR Invite back in February.  Long, tenth in this fall’s Foot Locker Nationals, has been making some noise in St. Louis running season bests of 2:11.9 (US#10), 4:52.26 (US#13), and 10:27.49(US#17). 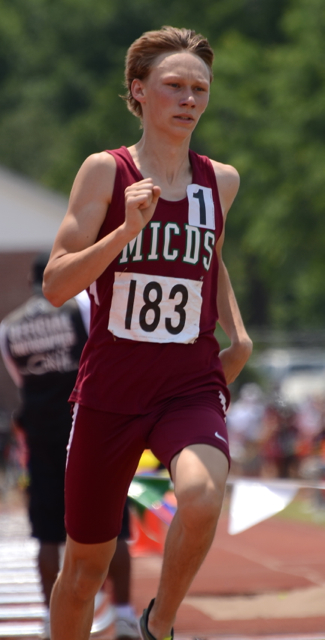 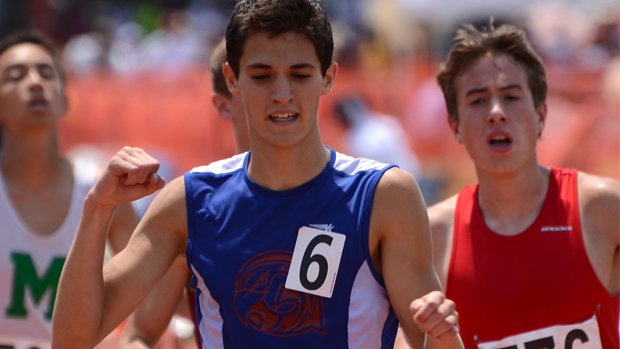 On the boys side the field is equally as talented with a rematch of the 3rd and 4th place finishers from Arcadia. Garrett Lee (SR, Belvidere, IL) and Amos Bartelsmeyer (SR, St. Louis, MO) will race once again after Lee beat Bartelsmeyer by just .15 seconds in California. Bartelsmeyer, the defending 3A 1600m champ, comes in with the top PR with his 4:11.97 performance from the Festival of Miles last year.  Also surely to be in the mix is Spencer Haik (JR, Springfield, MO).  Haik holds the 33rd best time in the nation from his 4:14.91 clocking at Hillcrest (where he went out in 60 seconds for the first 400m).  As a sophomore, Haik turned a lot of heads storming down the homestretch to take the 4A 1600m in dramatic fashion.  The fun doesn’t stop there as you have to add in Marquette junior Noah Kauppila who has one of the fastest times ever run by a Missouri high school runner.  He was 12th in a stacked 3200m at Arcadia where he ran 8:54.45.  He followed that up with a 4:17.08 1600m and 52.26 400m this past weekend.  Combined the 8:54 and 52.26 (off of little rest after 1600m) and you have yourself a scary fourth seed!  A more in depth preview will be released closer to the race on Saturday. 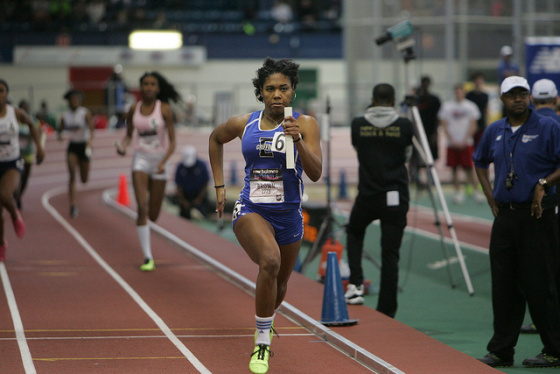 The past couple of years we have witnessed some great Payton Chaney - Tianna Valentine duals.  Some new faces are on the scene with the return of some familiar oes.  First things first – if you aren’t familiar with Aaliyah Brown (SR, Frankot, IL), learn the name before this weekend. This girl will probably beat a chunk of the guys' times at the relays!  With a 11.44 PR from the Adidas Dream 100 last year, this girl is among the best sprinters in the nation. She has already racked up a number of great performances this season such as her second place finish in the 60m at New Balance Indoors and a first place finish in the 100m at the Texas Relays.  She will be lined up against the 7th place finisher from Missouri Cross Country Championship.  Yeah. You read that right.  The second entry in the 100m was 7th in the largest class for Missouri.  Whitney Adams (SR, St. Charles, MO) might be the most versatile track athlete in the nation with PR’s of 11.79, 24.46, 54.70, 2:19.90, and 18:57 (5K XC).  She has made a great transition to the track since her days on the course with a 56.23 season best in the 400m and 25.73. Adams will be running on her future home track as she is committed to attend Kansas starting in the fall. The third place finisher from last year, Jazmin McCoy comes in with the third seed.  McCoy has done nothing but win the season with victories at Rusty Hodge and Hillcrest. The third place finisher from not only KU but the Missouri State meet, McCoy comes in with a personal best of 11.74. Rounding out the top five is Ashley Henderson and Nataliyah Friar. Henderson beat Whitney Adams in their only meeting of the season at Charlie Beck.  Friar has made a name for herself in the jumps, particularly the triple jump as she has won the state meet two years in a row.  The future LSU Tiger can hold her own on the track coming into the race with an 11.93 best. For the boys, another event with the top three returning, the 100m should be among the best of the weekend. Kenzo Cotton looks to keep his title as the KU Champ as he won last year’s competition.  The Nebraska State Champ in the 100m and 200m has a personal best of 10.40 followed by Joe Reagan of Kansas.  Reagan was third in last year’s competition but went on to run 10.45 to win the Kansas State Meet.   Completing the top three is Roy Bay of Truman (MO) as he was second in last year’s race in 10.80.  He continued to drop his time down to 10.58 before he placed fourth in the Missouri State Meet. We have three separate girls who have jumped 5-10.25 in the high jump, 40-4 in the triple jump, and 13-6.25 in the pole vault.  Talk about some athletes! .  The top seed, Nataliyah Friar has won the Missouri Triple jump title two years in a row (40-4 PB) and was second in the Long Jump this past spring. The girl who beat her – Jazmin McCoy – will also be in the field. McCoy is one of two girls that enter with a best over 20 feet as she jumped 20-2.75 late in the summer last year after winning the long jump at the state meet.  Moving west, we look at Alexa Harmon-Thomas.  The Lawrence resident is one of the best multi event stars in the nation with a second place finish at New Balance Indoor Nationals this spring.  She is coming off of a personal best this past weekend at her home meet where she jumped 18-11.25.  Oh and not to mention she holds bests of 14.28 in the 100H and 5-10.25 in the HJ!  Another Kansas star, Emily Brigham, is the second girl to enter with a best over 20 feet.  She has the best PR entering competition as she jumped 20 feet 4 inches at the Great Southwest Classic last year.   Aside from Long Jumping, you’ll be seeing her in the Pole Vault as she enters with the best seed in that event with a PB of 13-6.25. Lastly, we look at Parker English. The Evanston (IL) standout beat top seed Friar at her home meet early in the outdoor season.  She too is coming off of a lifetime best as she jumped 18-11.5 to win the LJ at the Midwest Prep Invite this past weekend. Pre-State Battle (Minus One)

We have to talk about at least one relay; it is the Kansas Relays after all. Arguably the top three of the top five best teams in the state will be duking it out.   Eurkea, headed by super sophomore Hannah Long (if you’ve been under a rock and don’t know who she is, go read about her in the mile) and Angie Sumner might be considered the “favorite” but have teams like St. Teresa’s and Francis Howell to contend with.  STA is the reigning 4x8 State Champs and return all of their relay members including the duo of Courtney Coppinger and Lane Maguire.  Add in Ann Campbell who is off to a great sophomore track season and that team should be one tough squad.  Also in the mix will be Francis Howell who dethroned the Lee’s Summit West Titans in the fall, winning the XC Team title to stop the LSW 6-Peat.