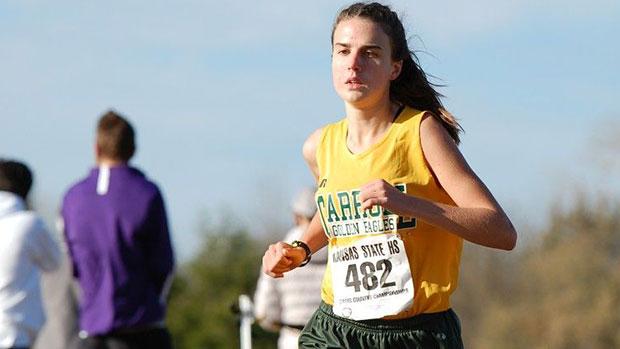 St. Thomas Aquinas will not win the class 5A boys cross country state championship this year.

There, now that I've gotten your attention, let's be real.

For what is closing in on a decade now, St. Thomas Aquinas enters the Kansas cross country season as the prohibitive favorite to win a state championship. They've won seven consecutive from 2014 through 2020, rarely being challenged including last year when they rolled to a 35-point win over St. James Academy.

Dating to 1994, the Saints have won 11 state cross country titles. The program is still a ways off the state records of 14 consecutive titles - and 21 overall - by Shawnee Mission Northwest.

But the St. Thomas Aquinas engine is revved up and shows no signs of slowing down. Seniors Logan Seger and Ashton Higgerson placed fourth and seventh, respectively at the state meet last year and are expected back to lead the program's drive for eight straight.

Senior Darren Mallot is also a returning state medalist, placing 20th at the state cross country meet last year. Aaron Scaletty, now a junior, was just out of the medals at 22nd.

And - in case you're wondering -- Aquinas had five of the top nine finishers in the junior varsity meet at last year's Eastern Kansas League meet.

The usual suspects are lining up to take their best shot at dethroning St. Thomas Aquinas.

St. James Academy returns 5 of 7 that ran at state last year, including seniors Eli Moore (eighth) and Terry Irvine (tenth). Mill Valley, third last year, brings back just 3 of 7, led by senior Chase Schieber, who was 13th at state a year ago.

The team that looks primed to make a strong push is Bishop Carroll, which placed fourth at the state meet in 2020. Senior Carson McEachern was the state runner-up in cross country, 14 seconds ahead of Seger. McEachern is the top returner to the class 5A field this season.

But Bishop Carroll returns its entire team from last year's state meet. Even though McEachern was the squad's only medalist, the 2-5 group had a pack time of 39 seconds. What will be interesting as this season goes along is how well Bishop Carroll can keep that type of pack together, and how far up in the results they can move the pack.

Maize South edged Bishop Carroll by a single point to win the 2020 state championship and both teams are among the top contenders this year, along with Mill Valley and Kapaun Mt. Carmel.

Mill Valley appeared to be the top team in girls 5A heading into last year's meet, but had a bit of an off-day at state with the back end of its lineup. Katie Schwartzkopf, a senior, was the state runner-up last year, as well as the runner-up in class 6A in 2019 and the 6A state champion in 2018.

She heads up a team that again has state title hopes, with four of its top seven returning from last year. Mill Valley was the class 6A state champs in 2018 and 2019.

Kapaun Mt. Carmel could be the sneaky one in this bunch. The squad was fifth at state last year, but they're bringing back four of their top five, including state medalist Kelsey Bruening (14th), a senior. With a nice mix of youth and experience, Kapaun Mt. Carmel is one of those teams that could gradually work its way onto the state podium without a lot of fanfare.

Among individuals, Jackson is shooting for her third straight state crown, but she'll get a stiff challenge from Schwartzkopf and Forbes, her teammate. Andover senior Elizabeth Vetter was fourth at state last year, and has the advantage of running the state meet on her home course.

Nine of the top ten finishers in class 5A last year are back this season. The others include senior Zoie Ecord of Maize (eighth) and juniors Grace Hanson of KC Piper (sixth), Hannah Grover of Valley Center (seventh), Bethany Druse of Seaman (ninth) and Maize South's Sargent (tenth).