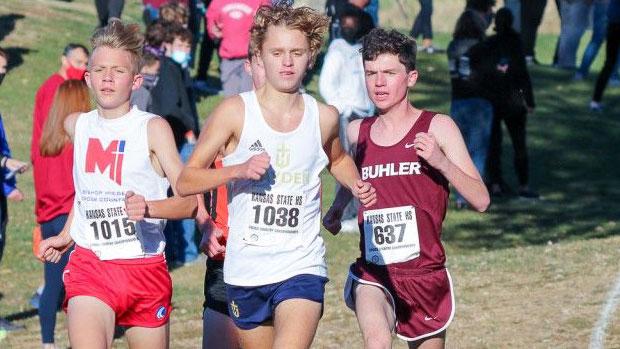 Could we just fast forward to October 30 and the Kansas Class 4A state cross country championships in Wamego?

Because that battle we saw last year between Hayden's Tanner Newkirk, Buhler's Tanner Lindahl and Bishop Miege's Micah Blomker for the class 4A boys' individual title was must-see TV.

Over 3.1 miles of rolling hills, the trio exchanged the lead in a series of merges, urges and surges during which time each runner seemed to be on the verge of the individual state title.

But Newkirk had just an ounce more than his two rivals, edging ahead in the final half mile and holding on for the win in 15:53. Blomker, a freshman, was second at 15:56 and Lindahl - the 2018 state champ as a freshman - was third for the second year in a row, 15:59.

Blomker has since transferred schools -- he's the top runner at Shawnee Mission North now -- but Newkirk and Lindahl (now seniors) are back for Round Two of what could be another exhilarating state meet dual.

They headline a field that also includes Tonganoxie's Eli Gilmore, who actually led last year's state championship when he raced out to a 5:02 opening mile. Gilmore ended up fourth in 16:38.

Cailie Logue of Girard (2013 to 2016) and Taylor Briggs of Chapman (2017 to 2020) each won four consecutive state titles, spanning that timeframe. They are among an elite group of six Kansas girls who have accomplished the feat, and now are teammates at Iowa State University.

Had Sydney Owens of Eudora been born one year later, she might have had a decent shot at extending the division's streak of four-time winners to three. Owens was the state runner-up as a freshman - she also won state track and field medals in the 800, 1600 and 3200 last spring -- and now is the top returner in a field that has suddenly become a bit more evenly-matched.

Owens nabbed second last year in a time of 20:09.7, just 13 seconds ahead of Hayley Trotter of Clearwater, who is now a junior. Riley Smith of Baldwin, a senior this year, was just a little further back, placing fifth in 2020.

More than half of the state medalists are back in the class 4A girls division this year, so beating the field won't come easy for any of the contenders. Others to watch include Wamego senior Adaline Fulmer (sixth at state last year), Louisburg sophomores Maddy Rhamy (eighth) and Lila Edwards (tenth), and Baldwin senior Jana Landreth (ninth).

Baldwin's girls are the runaway favorite to repeat as state champions. A year ago, Baldwin won its 12th girls state title, and third in four years. Baldwin returns three of its top five from a year ago, and will need to fill out its depth, but with Smith, Landreth and sophomore Bailey Smith (16th at state a year ago), they have a solid core to start with.

They'll be tested early...and often. The Frontier League also features very strong teams from Eudora and Louisburg, who finished second and third at state last year. That trio begins this season as the leading contenders for the three podium spots at state again.

In addition to Owens, Eudora returns senior Mackenzie Mayer (11th at state in 2020), while Louisburg returns senior Reese Johnson (15th) to go with Rhamy and Edwards.

Buhler's boys got themselves into a tussle with Bishop Miege for the 4A team title a year ago, but with Blomker and the squad's No. 2 runner gone, Miege likely doesn't have the strength to challenge Buhler this year. Winfield, third place last year, also lost its top two to graduation.

One team that seems to be on the upswing is Wamego, which was fourth last year and brings back five of seven. Wolfe is a rising star in this division and gives the Red Raiders a viable front-runner at the state level.

Wamego, though, gets a big boost from senior Noah Williams, junior Brady Stegman and sophomore Harrison Cutting - each of whom finished just outside the state medals in 2020.