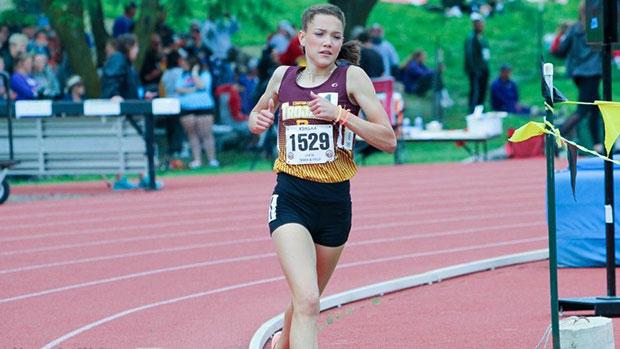 The balance of power in Kansas' class 2A cross country division has a heavy slant toward the southwest corner of the state.

Stanton County enters the 2021 season in an enviable position. The boys and girls teams bring back established stars to head their teams, and the depth to pull off a sweep of the class 2A state titles.

The girls' squad, in fact, has one of the most dynamic runners in all of Kansas. Chesney Peterson dominated class 2A to the tune of four state championships last year as a sophomore - she clocked 18:17 at the state meet to win an exciting battle against Kansas City Christian's Alysia Wagner, then backed that up with state titles in the 800, 1600 and 3200 on the track last spring.

There's not a meet in Kansas that Peterson wouldn't be among the favorites to win, regardless of competition.

We're not sure where the contenders for Peterson's state titles will come from this year. In each of her wins last year, the closest finishers behind her were seniors.

Josie Ware of West Elk could be one to watch for. She was fifth at the state meet last year as a junior. Juniors Maddie Russell of Ellis, Oona Nelson of Bishop Seabury and Suzanne Farnham of Stanton County were sixth through eighth, and freshmen Isabelle Pro of Seabury and Sydney Myers of Jefferson County North were ninth and tenth.

But those runners were 1 ½ to 2 minutes behind Peterson a year ago, so there's some catching up to do if they're going to be threats for an individual state title.

Peterson's dominance is reflected by her team, as well. Stanton County beat Remington by 35 points to win the girls 2A title, and led by Peterson and Farnham, they're a solid bet to win again this year. Sophomore Madison Seyb (24th at state last year) and junior Belle Batterton (61st) are key returners for Stanton County.

And Bishop Seabury - fourth a year ago - brings back top 10 state finishers Nelson and Pro, and the rest of the top seven that competed at state in 2020.

On the boys' side, Stanton County's Kamryn Golub placed third at state last year to lead his team to a runner-up finish. Now a junior, he's the top returner in the division. He'll have a great shot at the individual title, while his team is the early favorite to win the big gold trophy, as well.

Last year's 2A boys champion Berean Academy lost 3 of its top 5 to graduation, but one runner coming back is junior Andrew Harder, who led his team with a fifth place finish at the state meet. He and Mission Valley's Alfonso Rubio (sixth at state a year ago) seem to be the top contenders to Golub on the eve of a new season.

Berean could hold on to a podium spot, though the squad only has one other top 5 returner from last year's team: senior Eli Nord, who was 13th at state.

Kansas City Christian (fourth at state last year) may have the depth to challenge for a spot on the podium, if not for the state title. Senior Josh Howard could be in the mix for the individual title. McLouth is another team that seems to have substantial depth, though not necessarily a front-runner in its ranks.

Other class 2A boys who could factor in the state title chase include Drew Wilhite of Humboldt, Corbin Ricke of Spearville, Jonah Godina of Trinity Catholic, Haeden Forbes of Atchison County and Cooper Hamlin of Northern Heights.