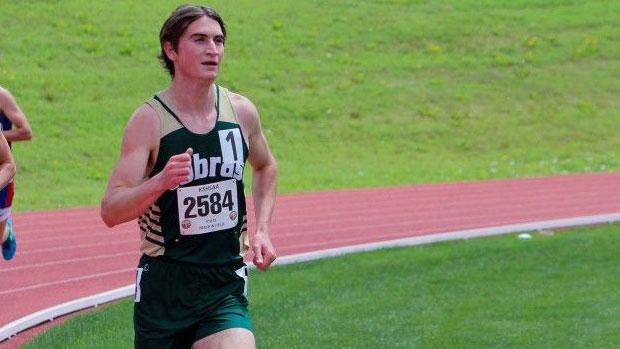 Could this finally be Daniel Little's year in class 1A boys cross country?

It would certainly seem so, as the Jackson Heights' senior enters the 2021 season with the top career mark for 5K, more than 40 seconds better than anyone other expected returners have previously run.

Little has earned his lofty perch as the preseason favorite to win the individual state championship come October, having finished ninth, fourth and sixth at the cross country state meet the past three years.

Little has never won a Kansas state championship, but he's gotten mighty close. At the past spring's state track meet in Wichita, he placed second in the 1600 meters, third in the 3200 and fourth in the 800. He's an eight-time state medalist during his high school career.

In addition to Becker, the top challengers to Little's final ascent in Kansas cross country running include Sam Pinkerton of Logan (17:06 career best, and seventh at the state cross country meet last year); Corbin Ricke of Spearville (17:07, who was 14th in the class 2A state meet a year ago); and Elijah Zortman of Fowler (17:09, eighth at state last year).

All of those top contenders will be seniors this season.

Meade's boys enter the season as a strong favorite to defend the state title they won a year ago. The squad's top three finishers at state last year were freshman - and all earned medals. Those three are Trent Roberts (12th), Logan Keith (14th, and Brock Keith (17th).

But Roberts was injured in a three-wheeler accident on Aug. 12 and is out for the season. Meade is probably still an early favorite for the title, but they'll need a couple others to step up if they want to stay on top of 1A boys.

Even though class 1A scores just four runners, many schools have a difficult time fielding a complete team. Meade's up-front strength currently projects as a 1-2 in the team scores; that's a pretty good start toward a state title.

Goessel and seniors Jacob Schrag (24th at state last year), Timothy Schrag (32nd) and Ben Olson (37th) head up the field hoping to catch Meade. Goessel will likely have the best pack time in this year's field, but the key to a state title will be moving that pack into the top 15 where they can battle with Meade's top kids.

La Crosse - last year's runner-up - could get back onto the podium with key returners Will Rues (21st) and Colton Maneth (31st).

The Kansas class 1A girls chase....well, there are no sure things in athletics, but you gotta like Doniphan West's chances for another state title.

The squad dominated last year's state meet with a 17-point win - when you're scoring just four runners, 17 points is tough to make up - and they're bringing everyone back this year.

That includes senior Elle Williams, who was second at state last year and is the preseason No. 1 in class 1A girls with a career-best time of 19:56.1. She's the only class 1A girl with a time under 20:00 heading into the new season.

Junior teammates Chloe Clevenger (fifth at state last year) and Claire Cole (11th) are back with top five aspirations. It's way early, but Doniphan West projects to repeat as class 1A champions by a whopping 52 points.

After Doniphan West, it's a cluster. Pretty Prairie - led by Abigail White (8th at state last year) - has the upper-hand on the rest of the field. The squad placed third at state a year ago, and returns most of that group. Osborne, Clifton Clyde and Macksville will give chase, all capable of nabbing spots on the podium.

Among class 1A girls individuals, Emma Weiner of Golden Plains is a star on the rise, having pulled off one of the more remarkable upsets in class 1A track and field last spring. Weiner won the class 1A 1600 meters last May after chasing down the defending state champion - Lincoln's Jaycee Vath - in the final 50 meters.