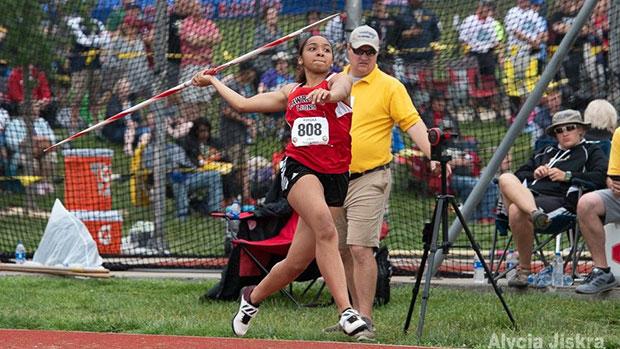 Amaya Harris of Lawrence, the class 6A javelin state runner-up in 2019 as a sophomore, is among the returning qualifiers to this year's state meet.

It was a ho-hum kind of regional weekend in Kansas track and field. And that's just how many of the state's best athletes wanted it to be.

There were 24 regional meets across Kansas Thursday and Friday, with the top four in each event advancing to this week's state track and field championships in Wichita. With so much at stake, the weekend could have proven to be a heartbreak for those with state title aspirations, but that really didn't turn out to be the case.

In fact, of the 36 athletes that top Kansas MileSplit's state leaderboard (18 girls events and 18 boys events), not even one failed to advance to the state championships.

In one case - that of Shawnee Heights sophomore Jeremiah Smith - the regional meet was a chance to send a very clear message: "I'm ba-a-a-a-ck!"

Smith, who earlier this season clocked a state-leading time of 10.37 in the 100 meter dash, had been battling a nagging hamstring injury for much of the past month. But on Friday at the class 5A Mill Valley regional he clocked 10.90 to defeat rival Malik Benson of Lansing, who was second in 10.97.

Benson, whose season best of 10.44 was No. 4 in Kansas, defeated Smith in April, their only meeting of the season before Friday. They are currently ranked 1-2 in class 5A; the rubber match will likely take place in the state finals this coming Thursday.

Benson, though, shined in another event. He soared 25-2.25 in the long jump to increase his state-leading mark, while also moving up to No. 3 in the United States. Benson also rebounded to beat Smith in the 200, where he is No. 1 in Kansas this season with a best of 21.38.

If Benson can duplicate that jump at the state meet, he'll take down the oldest record in Kansas, 24-11.75 by Wichita South's Veryl Crawford nearly a half century ago -- in 1974.

Also in the hoirzontal jumps, Bonner Springs senior Cortland Hervey ripped a career best by more than 2 ½ feet to win the triple jump at the class 5A Mill Valley regional. Hervey's winning jump was 47-7, which moved him from No. 12 to No. 1 in Kansas, and to No. 45 in the United States. His previous best in the event was 45-0 two weeks earlier; talk about peaking at the right time.

Wyandotte senior Malike Calhoun put up a career best in the triple jump by more than a foot, winning the regional title and grabbing the No. 1 mark in class 6A at 46-1.25.

Do-It-All stars move on to state

Another pretty good dual-event athlete - Paris Bond of St. Thomas Aquinas - won regional titles in her two specialties: triple jump (37-8.5) and pole vault (13-1). She's No. 1 in class 5A in both of those events.

Anjali Hocker Singh better get rested up this week. The Olathe North freshman won regional titles in the 800, 1600 and 3200 - setting herself up for what will be a mighty triple at this year's one-day state meet. Hocker Singh, who won the class 6A state cross country title last fall, looked every bit the part of the division's best distance runner at Friday's Olathe East regional, winning in times of 2:18.15, 4:59.94, and 10:52.65.

Any one of those times is pretty impressive; to do all of those in an evening's worth of work is bordering on incredible. She'll actually get a little more rest between events in Thursday's class 6A/5A state meet schedule.

Stanton County's Chesney Peterson also will take on the distance triple. She nearly matched her state leading time in the 800 of 2:15.90, clocking 2:15.91 to win the regional title. She also won easily in the 1600 and 3200 meters, and will seek to add those three state titles to the cross country title she won last fall. Peterson is a sophomore, which means COVID wiped out her freshman track and field season; we'll see her on the Wichita State tartan track for the first time this week.

Manhattan senior Daniel Harkin, the two-time 6A state cross country champion and Kansas Gatorade Runner of the Year, took a different route. Six days after winning the class 6A tennis singles state championship, Harkin ran conservatively but qualified for state with a win in the 3200 (9:40.03) and a pair of fourth place finishes in the 800 (2:01.83) and 1600 (4:39.00).

Manhattan's boys, which seem to be a runaway favorite to win the team title later this week, qualified athletes in 15 of 18 events.

Also in the distances, St. Thomas Aquinas standouts Logan Seger and Tommy Hazen staged a couple finish line battles to spice up the class 5A Pittsburg regional. Hazen (4:31.03) won by eight-hundredths over Seger (4:31.11) in the 1600, while Seger (9:32.43) made it even closer in the 3200 - one-hundredth over Hazen (9:32.44). Seger will also take on the 800 at the state (he won the regional title by four-hundredths of a second). Hazen and Seger will be the ones to chase in the class 5A distance races.

Counting all classifications, 12 Kansas athletes have dipped under 40 seconds for the 300 hurdles this season, and are separated by just a blip over one-half second. Now that would be a great race to watch...for spectators; the timing crew would go nuts.

Ah, maybe there was one shocker in the regional meets this week: Sterling senior Tyus Wilson didn't clear 7-foot. Okay, okay...he still won his regional, but we've become so accustomed to seeing him soar over the 7-foot mark, that his winning jump of 6-10 on Friday was almost pedestrian. It's the first time all season that Wilson has not cleared 7-foot.

That's just how good Wilson is. He's still got the No. 1 jump in the United States right now: 7-3, tied with Kamyren Garrett of Lawrence Central (Indiana). Wilson, who will compete for the University of Nebraska next year, will be a showstopper during Saturday's class 1A/2A state championships.

Class 4A pole vault defending state champion Ty McPhail of Andale could be prime viewing at state as well. McPhail, whose dramatic win on the last day of the twice-rain-delayed 2019 meet clinched the team title for Andale's boys, cleared a career-best 16-6.75 to win the regional title. McPhail, who committed to compete for Louisville next year, led a 1-2-3 finish for Andale in the pole vault, including fellow seniors Noah Meyer (13-6) and Gabe Ungles (13-0).

In case you're wondering, the Kansas class 4A and all-class record in the pole vault is one of the oldest records in the books: 17-0.5 by Gardner's Jeff Buckingham in 1978.

At that same regional, though, Andale's girls stole the spotlight from their boys' squad. Senior Katelyn Fairchild won regional titles in the discus (141-2), shot put (43-6) and javelin (175-4). Fairchild is No. 1 in all three events entering the class 4A meet this Friday; she's also No. 2 nationally in the javelin.

If you're following along, that's a 1-2-3 finish for Andale in all three of those events. The rest of the competition is likely happy that you only get three entries per event.

That, folks, is a whole lot of points in the field events - many of which translate well into state competition.