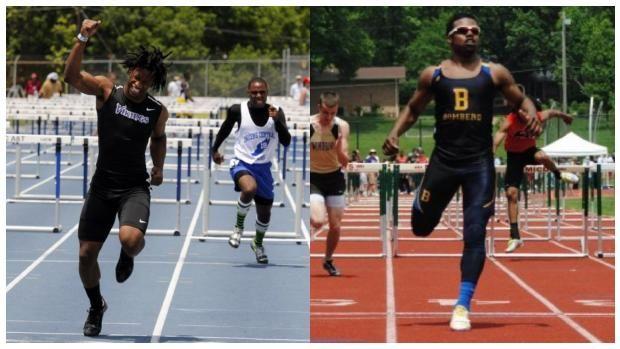 Ezekiel Elliott (Mo) and Todd Gurley II (NC) have cleared many hurdles to make their way to the NFL, but when these two men were in high school they made the hurdles on the track look easy; and even looked graceful in doing so.

Todd Gurley II (Now with the Los Angeles Rams) of Tarboro High School ran a PR of 13.86 at the 8th IAAF World Youth Championship in 2013 and was a state champion in the 110m High Hurdle event at the 2011 NCHSAA 2A State Track Championship. Check out this ESPN video showing Gurley's hurdling skills go beyond the football field.

There are many photos all over the internet of these two running-backs showing off their hurdling past as they leap defenders trying to make a stop.

Ezekiel Elliott of the Dallas Cowboys was a state champion in many events at John Burroughs High School; In fact, he won four individual titles his senior year. "Zeke" ran a personal best of 13.77 in the 110m High Hurdles (A time that would've been ranked 6th nationally against last year's high school hurdlers) and a personal best of 37.52 in the 300m Hurdles(Would've been tied for 40th nationally last year).

Now they get the opportunity to play against each other in an exciting NFL play-off mach-up this weekend, with the Dallas Cowboys(10-6) travelling into the Los Angeles Rams' (13-3) territory.

Who do you think is the best hurdler that is currently in the National Football League? Vote below!

Hurry up and vote now! The poll closes Saturday, January 12th at 7:15 PM Central Standard Time. Vote before it is too late!