In the 1997 hit movie Men in Black, Agent Kay (Tommy Lee Jones) recruits a streetwise cop, the future Agent Jay (Will Smith) to join the alien-fighting organization by explaining how most of what Agent Jay "knows" isn't true in this classic scene:

Will Smith and Tommy Lee Jones in Men in Black, "Imagine what you'll 'know' tomorrow."

In that scene from Men in Black, Tommy Lee Jones could very well have been telling Will Smith about the current revolution in injury identification, treatment, and prevention rather than describing aliens among us on Earth. Regardless of how experienced and informed an athlete or coach is, there's a good chance that much (possibly even most) of what they think they "know" about injury prevention, treatment, and rehabilitation is probably just as wrong as what Tommy Lee Jones is describing.

I'll give you an example.

Tight hamstrings? You think that means they need to be stretched, right? I mean, everybody knows that. Maybe you even went to some big seminar just last month and somebody with a bunch of letters after their name and who used a bunch of big science-y sounding words showed you these great new stretches that you can't wait to use yourself, if you're an athlete, or with your team, if you're a coach.

Nope, not so fast.

We now know that it's likely that the problem with tight hamstrings is that they are overstretched. If so, stretching them may only make the problem worse in addition to not correcting the underlying cause of them being tight in the first place.

That is just one of the many "facts" regarding injury prevention and treatment upon which coaches and athletes have relied for decades that are now being discovered to be not only wrong, but in some cases even harmful.

I'll explain the hamstring thing shortly, but first I need to back up and walk you through what is happening, why it is happening, and why very few people, including knowledgeable coaches, athletes, and even some medical professionals are aware of it.

The current revolution in injury treatment and prevention is due to a simple change in healthcare law that hardly anyone outside (and even some inside) of the medical profession noticed when it happened. In recent years, states began dropping the requirement for a physician's referral to see a physical therapist and allowing patients to proceed directly to a physical therapist who can assess and treat injuries (or even identify and correct issues in uninjured runners) without first seeing a doctor.

This simple change would prove to be flipping the first domino that set an athletic revolution in motion.

As a result of allowing direct access, demand for physical therapy services soared. That is why you may have you noticed a number of new physical therapy offices appearing everywhere from strip malls to bank buildings in recent years.

The increased demand for physical therapy services in turn created opportunities for new, cutting-edge research. That research is drastically altering our knowledge of injury prevention and treatment.

But it doesn't stop there.

This explosion of knowledge, specialization, and research is calling into question many things we "knew" about injury prevention and treatment, and in many cases the things we thought we "knew" are being revised and even eliminated or reversed.

The result for those who are utilizing this new access is a reduction in injury rates, new and sophisticated ways of assessing running injuries, neuromuscular reprogramming and other changes that prevent and treat injuries as well as improve efficiency. Information and treatment that was barely even available to world-class or professional athletes a decade or two ago is suddenly becoming available to the general public.

For example, for decades training systems for distance runners correctly emphasized cardiovascular development and training because that is the "engine" that powers middle-distance and distance runners. Bigger engine means better performance. However, any vehicle needs a "transmission" linked to the engine in order to turn the power of the engine into motion. The "transmission" for a runner is their neuromuscular and skeletal systems, and comparatively little attention was paid to the transmission. Thus, many runners had massive cardiovascular engines hooked to comparatively scrawny, inefficient transmissions.

It's kinda like dropping a Porsche engine in to a Prius. The problem isn't that the engine is too powerful, it's that the transmission isn't strong enough to handle that power. You don't need or want a weaker engine. You need a stronger, more efficient transmission.

The physical therapy direct access revolution is changing what we know about "transmissions" and making this new information accessible to athletes and coaches. 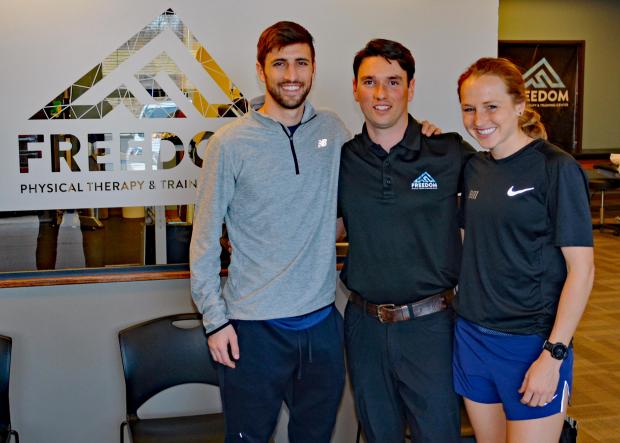 To better understand how direct access has rewritten what we "know" about injury prevention and treatment, I reached out to Dr. Donny Dequine, PT, DPT, a physical therapist and owner of Freedom Physical Therapy and Training Center in the Kansas City suburb of Shawnee, Kansas. Dr. Dequine and his staff work extensively with runners of all levels. Dr. Dequine's work can range from designing a simple neuromuscular training program for a high school cross country team that reduced injuries to helping fine-tune national-class and professional runners to help them reach the next level or recover from injuries.

I stopped by Freedom Physical Therapy recently on a day that Dr. Dequine just happened to have two national-class runners in the office and they were gracious enough to allow me to sit in and observe his assessment and treatment of them. One was Zach Zarda, who posted a 28:42 10,000 at the Stanford Invitational in 2015 after finishing his college eligibility at Arizona State. The other was Rebeka Stowe, a 9:52 steeplechaser and Olympic Trials finalist in 2012.

Zarda was getting treatment that had helped him return to training from a torn labrum quicker than anticipated when the injury was first diagnosed. Stowe, formerly with the New Jersey New York Track Club coached by Frank Gagliano, was having a biomechanical assessment done not only to help her own running as she takes on the task of coaching herself, but most importantly to add to her foundation of knowledge as she serves runners in NYC & Nationally. Stowe is a lead coach of RUN with THE LAB & Nike Running in New York City, where she tailors and facilitates individualized training. 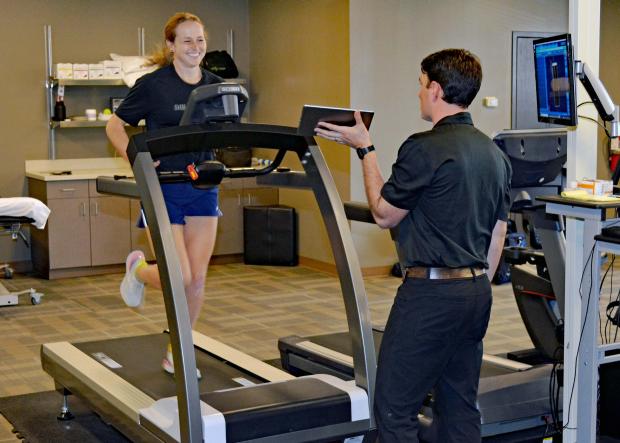 9:52 steeplechaser Rebeka Stowe runs on a treadmill with a force plate

while being videoed and getting instructions for Dr. Donny Dequine, PT, DPT

"That's because the problem never was the bulb. The problem was that the breaker in the fuse box had been tripped and there was no power getting to the bulb, even when you flipped the switch. The breaker box is like your brain, directing what electricity gets sent to certain locations. You can change the bulb and flip the switch all you want, but if you don't make the breaker box send the electricity to the right place, the bulb won't light," he concluded.

What makes our bodies so much more complex than this analogy can cover, explained Dr. Dequine, is that our brains will redirect nerve impulses to other muscles, very subtly changing our mechanics to compensate for some deficiency or injury. Treating only the muscular or connective tissue injury may do nothing to resolve the underlying problem that caused it. Identifying and fixing that underlying issue often requires training our brains to fire different muscles or fire the same muscles in a different sequence.

Dr. Donny Dequine explains how a surface EMG is used to analyze whether Rebeka Stowe is firing the correct abdominal muscles to assess whether she's using her core correctly.

To demonstrate, he picked up a large elastic band.

Holding it loosely in front of him, he asked me if it was tight. When I answered that it wasn't, he stretched it out as far as it would go and asked, "What about now?" When I said "yes," he explained that muscles were the same way. Sometimes they're tightest when they're stretched. Just like stretching a rubber band further can cause it to break, stretching an already over-stretched muscle can injure it further and won't fix the underlying cause of the tightness.

"The question," said Dr. Dequine, "is why was it overstretched to begin with? Very often the answer to that question lies in a neurological pattern that needs to be retrained in addition to healing the injured muscle or connective tissue." As I learned, that's not nearly as scary as it sounds. In fact, Rebeka Stowe found it downright hilarious, as you'll see in a video in the next article in this series. 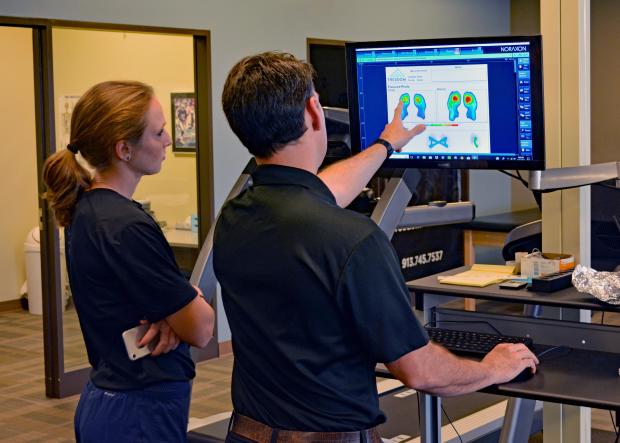 Over the course of the next three articles, we will dive in to just some of what we've learned from this explosion of knowledge, show how much our understanding of injury treatment and prevention has changed, and illustrate why finding the right physical therapist is just as important as finding the right doctor or lawyer for your needs.

The next three articles in this series, approximately one per week, will be:

Neural Pathways or Recalculating the GPS of Your Brain - why and how your brain needs to be trained to send signals down a different road.

Strengthening versus Stretching - It all seemed so simple before, didn't it?

Tying it All Together: Biomechanics - Building the best running transmission out of neural pathways, muscles and physics. Now, doesn't that sound fun? 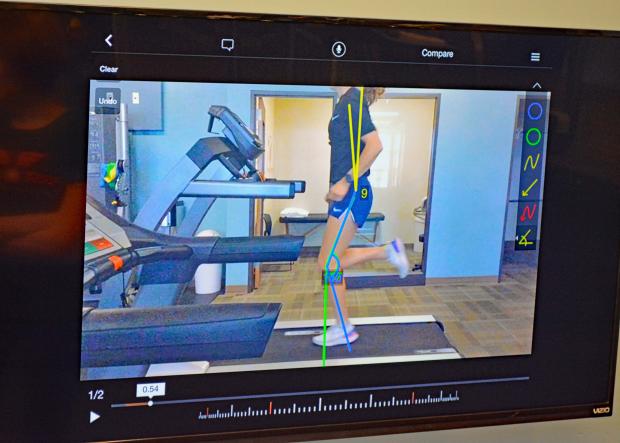 Breaking down the mechanics of Rebeka Stowe

Check back soon for more in this series.