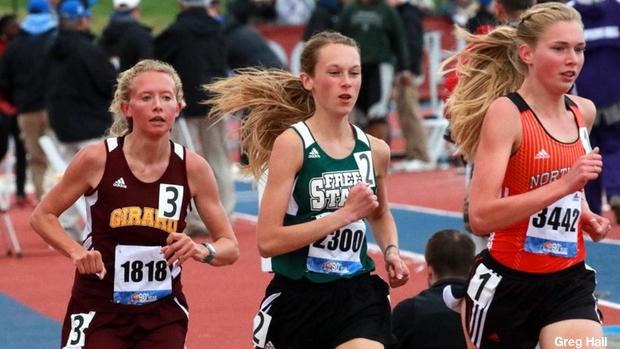 Heading into the Kansas Relays, the girls 3200m appeared to be one for the ages and it certainly did not disappoint.  Iowa State commit Cailie Logue would emerge on top in a race that featured three of the best distance runners in the midwest.  Her winning time of 10:09.97 was a PR of 22 seconds.  The top three athletes, Logue, Molly Born (10:10.64), and Emily Venters (10:16.61), all were under the previous meet record of 10:25.42 set by eventual NCAA 5K National Champion Emily Sisson in 2008.

The race video, as well as the live stream from the meet, may be viewed on FloTrack for all FloTrack and MileSplit Universal subscribers.  All race videos from the meet will be available on MileSplit on Sunday.

Born pushed the early coming through the one-mile mark in 5:08.  She would until roughly 50 meters to go when Logue kicked down the five-time Kansas state champ.  Logue's last lap of 1:10.19 capped off a five-minute last mile.  Both Venters and Logue are scheduled to compete tomorrow in the Girls 1600m.