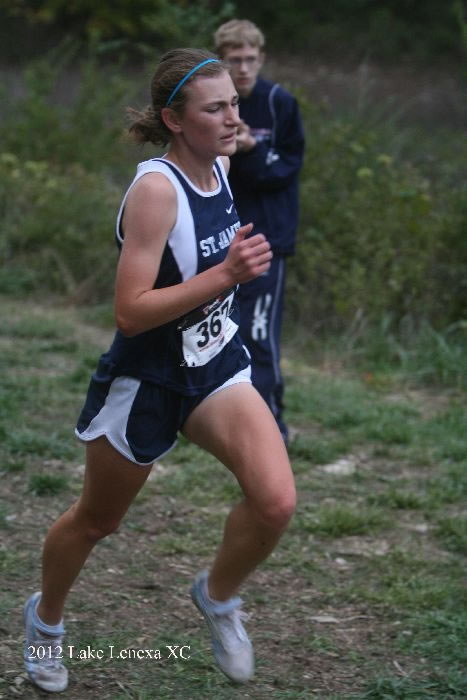 This past weekend, Alexa Van Lerberg of St. James Academy collected her fourth win of the season winning the Lake Lenexa Invitational in a time of 16:53.  On a beautiful day for running, the course was in the best condition ever according to St. James' Coach Harber.  For those unfamiliar with the St. James course, it "has two hills similar in length and grade to the old Billy Mills ascent at Rim Rock."  Alexa says "When the other teams saw the giant hill, they couldn't believe they had to run up it.  Coach Harber and Coach Dolan have been working with our team to perfect our race strategy."   According to her coach, Alexa's plan was "to have fun and enjoy her last race on her home course."  For the first half of the race Alexa ran with her teammate, Caroline Goode who went on to finish second. "We ran together for the first half of the race, and I think that was good for both of us.  It's always nice to have a teammate push you" said the St. James senior.  She made her move at the hills that she has become familiar with.  "Since this is our home course, we had a lot of practice running up that thing."   "After climbing up the last big hill on the course Alexa created separation and increased her lead during the final 1K of the race" said Coach Harber.  Her time of 16:53 set the course record, finishing first for the fourth time in six races.  When asked what her strengths as a runner are Coach Harber said, "Alexa has wonderful focus during her races.  She is mentally strong and she has tremendous courage.  Even when her races are not progressing as planned, Alexa believes that if she will keep her focus and continue to take positive action, by the end of the race she will accomplish her objective. And she almost always does!

From here Alexa will run at the West Platte Invitational, another hilly course, but this time a 5K.  Regionals will be at Shawnee Mission Park followed by State at Rim Rock.  Last year Van Lerberg finished fourth in 4A but this year she will have a different challenge.  St. James has moved up to 5A this season.  With this will come a different course for the state meet, as the 4A state meet is at Wamego and the 5A State meet is at Rim Rock.  "My Goal [for state] is just to run my best cross country race ever." Coach Harber has goals hopes that Alexa can lead the Thunder past regionals and to the State meet.  In her senior year now, Van Lerberg has increased exponentially year over year.  Coach Harber attributes that to her wonderful work ethic.  "As a student, a musician, and an athlete, Alexa is willing to work very hard to be her best.  As a distance runner she trains intelligently and that has helped her to avoid injuries.  Alexa is very consistent.  She began running in our summer program before her freshman year and she has run year-round all through high school.  Alexa enjoys challenging herself in the weight room and during the core strength sessions."    Congratulations to Alexa Van Lerberg for being selected as this weeks Runner of the Week.

KS Runner of the Week Series