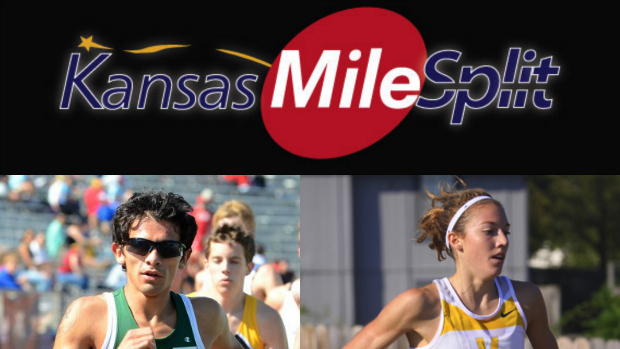 We would like to introduce our newest feature, Power Rankings.  We will come out with rankings every week alternating between teams and individuals.  These are intended for fun and extra motivation as the season rolls along.  Think someone should be ranked?  Either comment or send an email to DEverett@Milesplit.Com

#1) Alli Cash, Shawnee Mission West, SR - Just when you thought her last performance was amazing, BAM! She drops another jaw-breaking time.  Just how fast can this girl run?  It is clear she is a special talent and deserving of the top spot upon our rankings.

#2) Kaelyn Balch, Bishop Carroll Catholic, SR - The Bishop Carroll senior is off to a hot start winning her first three meets and dipping under 15 for two of them.  She ran her fastest time of the season so far at the Hesston Invitational where she ran 14:32 beating the field by a minute and six seconds.

#3) Nashia Baker, Lansing, SR - Also undefeated, the Lansing senior is coming off of a great race at the Bonner Springs Invite where she clocked in at 14:36.96. Baker has continued to improve throughout her career, running 15:41 at this meet last year and 17:08 the year before.  She has dropped time every meet this year and is quickly becoming one of the best runners in the state.

#4) Morgan Wedekind, Valley Center, SR - Wedekind is another girl yet to lose this season.  She won the Valley Center Invite and followed it up with a 30 second victory at the Buhler Invitational this weekend.  Wedekind is also coming off of a fabulous track season where she ran 5:08./11:10

#5) Jenna Farris, Lincoln, SR - We only have one time for this girl and it was at the Hesston Invite.  For comparison sake, she was 24 seconds behind Balch's time.  They were not in the same race though.  Hopefully we can find out more about Farris in the upcoming weeks.

#6) Alex Miller, Garden City, JR - Miller remains undefeated through four races which is the important part.  She won her division of the Hesston meet and followed it up with a PR and a victory at the Hays Invite this weekend.  As long as she keeps winning its hard not to rank her this high.

#7) Alaina Schroeder, Manhattan, JR - The Manhattan senior is off to a hot start winning her first two meets and then placing sixth at a competitive Missouri Southern Stampede.  With Rim Rock around the corner it will be interesting to see where she fares and if she can improve on her seventh place performance from last year.

#8) Heather Ruder, Thomas More Prep, SR - While she did start off slow losing her first race, Ruder showed what she is capable of this weekend at the Hays Invite.  She ran 14:29 to win her race by over 45 seconds.

#9) Katherine Dillard, Bishop Caroll Catholic, SR - Dillard has to race Balch week in and week out and she holds her own. The Bishop Carroll two runner has finished second behind her teammate for two weeks in a row now after being defatted by Deidra Walker by only a second in her first race.

#10) Deidra Walker, Maize, SO - Walker can't catch a break.  She started her season by finishing behind Kaelyn Balch by only 9 seconds.  She then went to the Emporia Invite where she was defeated by #7 ranked Schroeder by 21 seconds.  This weekend she was half a second behind Dillard.

#11) Mady Nestor, Maize South, JR - Nestor has put up some good battles to #5 Alex Miller for two weeks in a row now.  She was 11 seconds behind her this weekend at the Hays Invite and only five seconds two weeks ago at the Hesston Invitational.

#13) Malika Baker, Lansing, SR - Being a twin can be tough especially when your twin sister gets the better of you in the fall.  Malika is sticking in there despite having to constantly race one of the best runners in the state.  She has finished second behind her three times and third in one race.  She is coming off of a great time at the Bonner Springs Invite where she was 20 seconds ahead of the first non-Baker finisher.

#14) Kayla Doll, Garden City, JR - Doll is another runner that has done well against stiff competition.  She has finished second, third, and third in her first three races.  The people she has lost to are Nestor and Miller, both ranked above.

#15) Chelsea Jackson, Garden City, JR - Jackson continues to finish right behind the same group of girls. She was only 2 seconds behind Doll this weekend at Hays. All of the girls that she has lost to are ranked, including two of her teammates.

#1) Angel Vasquez, DeSoto, SR – The returning Class 4 State Champ has looked great so far this year.  After placing third behind the #2 and #5 ranked Missouri runners at the Greg Wilson Classic, Vasquez has been on a role winning the Wamego Invitational and the Bonner Springs Invitational.  The returning 4A Cross-Country, 1600, and 3200 state champion ran the fastest 5000 in the state thus far on Saturday blasting a 15:34 to win by just over 40 seconds.

#2) Cory Donley, Sacred Heart, SR -  The Week 2 Runner of the Week and returning Class 3 XC State champ is undefeated through 3 meets this year.  At the Hesston Invitational he had the fastest time on the day by 11 seconds.  Last week at the Clay Center Invitational, he dominated the field winning by 36 seconds.

#3) Gage Garcia, Bishop Carroll, SR – While there is a big difference between cross-country and track, a 9:30 3200 speaks for itself.  Garcia is the fastest returning 3200 meter runner and has a big win at the Bishop Carroll Invitational, 8 seconds over #6 Brandon Lewis.

#4) Sam Guinn, Blue Valley Northwest, JR – Once again, the track doesn’t lie.  4:17 and 9:34 as a sophomore, Guinn proved that he is the real deal last spring.  His one race this fall was a win at the Olathe East Classic.  Only #5 Colton Donahue had a faster time.

#5 Kirk Bado, Shawnee Mission Northwest, SR – Being the top Class 6 returned counts for something.  Bado was 6th at the Greg Wilson Classic behind 2 Missouri runners, Angel Vasquez, and two of his teammates, but he led his team on Saturday at the Heartland Classic with at 14th place finish.  If we learned anything from last year, it is that Bado can peak at the right time.  Last year when he finished 4th at state in a blazing 16:02 he was just 7th at the Greg Wilson Classic.  Look for him to heat up as the season goes on.

#6) Colton Donahue, Blue Valley, SR – Donahue, the Week 1 Runner of the Week had a faster time than Guinn (different races separated by grade), but we gave Guinn the nod due to his track credentials.  Donahue was 3rd at the Blue Springs Invitational on Saturday behind Blue Springs’ Simon Belete and Stephen Mugeche, the Missouri #2 and #5 ranked runners.

#7) Brandon Lewis, Derby, SR -  The Derby senior has had a great start to the year with wins at Turner and Hesston.  He blew the field away at Turner last week by almost 1:15.  His one loss came at the Bishop Carroll Invitational to #3 Gage Garcia.  His time at Hesston was second to only to #2 Cory Donley.

#9) Pedro Montoya, Ellinwood, JR – Montoya opened up his season with wins at Great Bend and Hesston.  His time at Hesston, 16:16, was the 3rd fastest on the day, and was good enough for a 1:21 cushion over second place.

#10) Stuart McNutt, Blue Valley West, SO – McNutt ran a 9:47 full 2 Mile as a Freshman last year and is off to a good sophomore year.  He won the J.K. Gold Classic, and placed 3rd at the Missouri Southern Stampede behind #3 ranked Missouri Runner and a runner from Arkansas, but ahead of returning Missouri 1600 Champion.

#12) Oscar Carmona, Dodge City, JR – Carmona was 3rd at Bishop Carroll behind #3 Gage and just 8 seconds #7 Lewis.  He won the Hays Invitational last week and has a 4:23 PR to his name which doesn’t hurt.

#13) Tristyn Villa, Wichita North, JR – Villa started off his season 2nd at the J.K. Gold Classic just 12 seconds behind #10 McNutt, but came back with two strong wins at the Wichita North and Wichita Southeast Invitational.

#14) James Hampton, Bishop Carroll, SR – Hampton was 2nd place at 5A State a year ago running a 16:18.  He was 4th at Bishop Carroll behind Garcia (#3), Lewis (#7), and just one second behind Carmona (#12).  At Hesston he was second in his race behind Lewis.  We will give him the benefit of the doubt from his phenomenal performance at State last year.

#15) Josh Hanna, Winfield, JR – Hanna was third right behind Hampton at State last year running a 16:36.  We have yet to see him in any big meets this year but he has wins at Buhler and Clearwater where he beat honorable mentions Ren Bean and Jacob Wallace.