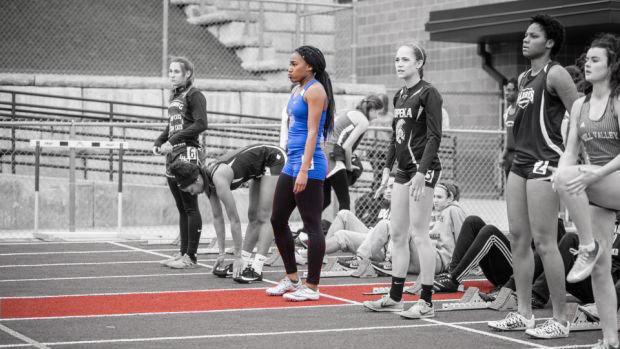 Aarika Lister prepares for her first 100m race of the 2018 outdoor season at her home opener, the Leavenworth Invitational. She would go on to be undefeated in the 100m all season long in her 2018 outdoor senior HS campaign, and would win all but one 200m race due to pulling a muscle in her team's 5A state runner-up 4x100m race.  Photo taken by James Shultz.

The top-five voted moments from 2018. View the full results and moments people chose from in the article here!

Aarika Lister has been a dominating force on the Kansas HS sprints playing field ever since the moment she graduated from middle school. Up until the the final day of the KSHSAA State Track & Field Meet with Leavenworth High School, Lister played a large key role on her very competitive team, a team that meant so much to her that she would sacrifice an undefeated record in the 200m in her senior season for just one team point.
Maybe winning is not so much a big deal to her, however. In a Question & Answer article with the Kansas Milesplit Senior Editor, Jim Madison, earlier last year at the start of the KSHSAA sanctioned outdoor track season (in April), Lister revealed that her goal is to PR. Don't get her wrong, winning is fun, the now-Oral Robert's University runner had said, but in the end, her goal is to come away with a personal record. "As long as I can see my times improve that's all that matters to me," Lister said.
Aarika Lister jogs the 2018 KSHSAA State 5A 200m Final after suffering an injury to her quad. She still pushed through the final for one point for her team.
In the last event of her high school career, Aarika Lister faced a choice. A choice involving personal sacrifice, a choice involving dedication, and a choice that involved bravery. Lister stood up with no blocks at the starting line of the 5A state 200m final and a brace on her right leg, leaving many Kansas track and field fans unsure of what to expect from the senior dominating sprinting sensation. What Lister did, however, would mean far more to the eyes of her team and her fans than winning the race.
Braving through her injury, Lister jogged through the 200m. It left a dent on Lister's perfect 200m record her senior season - but would mean one more point for her Leavenworth team. It was a sacrifice she made for her team, helping her team to a 5th place spot in the 5A state results with a total of 58 points.
An interview with Aarika Lister at the KSHSAA State Track & Field Meet with Rod Murrow, after destroying the state 100m record. Lister also discusses with Murrow the injury that held her back from potentially another 200m state title and why she decided to push through and jog the final for the single team point with her injury.
Lister, even besides her new state 100m record, left a large mark on the Kansas sprinting scene over the last four years. The Eastern Kansas sensation won 26 out of 29 of her 100m races and won 20 out of 23 of her 200m races in her high school years. She was a five-time individual state-champion. That's a pretty impressive record for Lister, who dreams of someday competing in the Olympics.
Now with the Oral Robert's University Golden Eagles, in Oklahomala; Aarika Lister's college journey is just beginning with the 2019 indoor season starting for her now, with one meet already having happened right back on Kansas soil. Lister took second in her first ever collegiate competition, running a 7.66 in the 60m dash at Kansas University's Bob Timmons Challenge, just two milliseconds off the best time she ran during her high school indoor career.
***
Aarika Lister takes 4th in a time of 7.71s in the 60m Final at the 2018 Arkansas High School Indoor Invitational. Video by Jim Yurwitz.