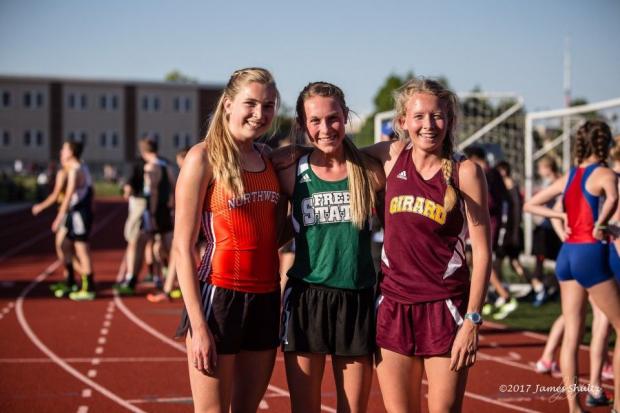 There is a difference between a "knowledgeable" coach and a "wise" coach. As an NFL player once told me, "A knowledgeable coach helps gets the most out of you now. A wise coach lays the foundation to help get the most out of you three or four or five years or even ten years from now." Walt McClure, Steve Prefontaine's high school coach, is said to have told him following his high school 2M AR of 8:41.5, "Don't let this be fastest you ever run, or I will have done you a disservice." The Triumvirate all had people in their life who were both knowledgeable and wise about the sport, and all who had an eye on the long game of their athletic careers from the very beginning.

Born was coached by Van Rose, a living legend among Kansas high school cross country coaches. Rose started the program when the school, Shawnee Mission Northwest, opened in 1969 and his teams won a staggering 35 state cross country titles, 21 for boys and 13 for girls, before his retirement this year. His boys' teams won a mind-boggling 14 consecutive state cross country titles from 1994 to 2007. The program would've made a juggernaut jealous. Perhaps even more impressively, his college-bound athletes had a solid record of continued improvement after leaving his tutelage.

Rose ran collegiately at Kansas State University in the mid to late 1960's under DeLoss Dodds, who recently retired as the athletic director at the University of Texas. Of Coach Dodds, Rose has said, "So much of my approach to coaching comes from him...[e]verything that we did had a physiological reason to it."

Before his retirement, Rose explained his coaching philosophy. "I believe in progression," he says. "I believe in consistency over an extended period of time....[s]tart small and gradually increase the number of miles you run over an extended period of time. It is not about talent or genetics." But Rose recognized that it wasn't just running that makes runners good. "I believe in doing all sorts of things that don't involve running that contribute mightily to the success of the runner, like core stability exercises, strength training, pool running, recovery exercises, nutrition, yoga, and sleep," he says. "You have to do these extra things."

Logue didn't have to look beyond the four walls of her own home for experienced guidance. Her parents both ran collegiately at Division II Pittsburg State University. Her father Matt is also the cross country and track coach at her high school. Her mother Christie (then Christie Allen) was inducted into the Pittsburg State Athletic Hall of Fame in 2003, thanks to the eight Division II national titles (yes, eight) she won, including back-to-back national cross country titles in 1991 and 1992. While success as an athlete in a sport does not necessarily automatically convey knowledge or wisdom about that sport such that it makes one a good coach or mentor, in the case of Logue her parents were also students of the sport, which is a potent combination.

Venters was coached by former University of Kansas runner Steve Heffernan. Collegiately, Heffernan was an 8:43 steeplechaser and team captain at KU his senior year. Like Coach Rose and the Logues, Coach Heffernan is a student of the sport and he, like Coach Rose with DeLoss Dodds, had a great mentor himself. While at KU, Heffernan was coached by the renowned Bob Timmons, best known for guiding Jim Ryun to the first high school sub-4:00 mile before moving onto KU, where he also coached Ryun to multiple world records and the Olympic silver medal at 1500 meters in the thin air of Mexico City in 1968.